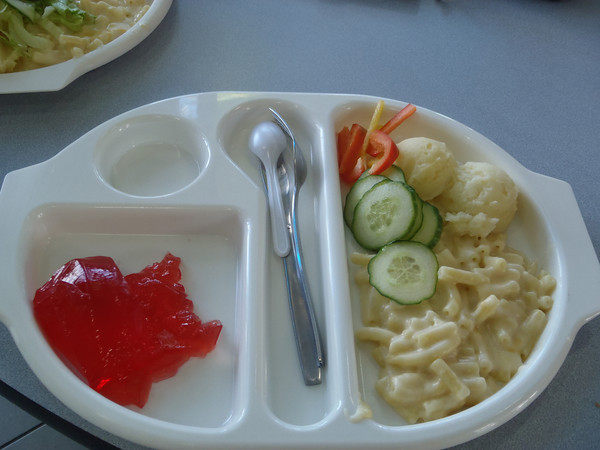 (CBS/AP) Martha Payne, a 9-year-old blogger from Scotland who set off a brief international outcry when local authorities banned her food blog containing images of her school's meals, has won her blog back.

Since setting up her NeverSeconds blog six weeks ago, Martha's images of uninspiring school meals - one consisted of two croquettes, a plain cheeseburger, three slices of cucumber and an ice pop - drew international attention. The blog, which kicked off as a writing project and to help raise money for a school-meals charity, has since drawn more than 2 million hits.

Martha, who lives in the coastal town of Lochgilphead, about 130 miles west of Edinburgh, gave each meal a "food-o-meter" rating, and offered an assessment of its contents.

She'd also give the meals a "Health Rating." The cheeseburger, croquettes and ice pop meal - with three cucumbers on the side - was scored a 4/10 by the 9-year-old.

In a statement, Argyll and Bute Council said Payne's photos were misleading and had caused distress to cafeteria staff. The council was particularly irked by a report about the blog in Scotland's Daily Record newspaper headlined "Time to fire the dinner ladies."

The council complained of "unwarranted attacks on its schools catering service" and said the blog "misrepresented the options and choices available to pupils."

As a result, it said, "a decision has been made by the council to stop photos being taken in the school canteen."

Martha's father David Payne said the blog was never intended to make the food look unappetizing. It includes such positive assessments as, "Lunch was really nice today and it helped cheer me up."

"The last photograph of a meal at school that she blogged, she gave it 10 out of 10," Payne told the BBC.

On a Thursday post titled "Goodbye" Martha bid farewell to their readers.

"I was told that I could not take any more photos of my school dinners because of a headline in a newspaper today," she wrote. "I only write my blog not newspapers and I am sad I am no longer allowed to take photos. I will miss sharing and rating my school dinners and I'll miss seeing the dinners you send me too. I don't think I will be able to finish raising enough money for a kitchen for Mary's Meals either. Goodbye, VEG." [sic]

The Internet storm was quickly followed by an official U-turn. Council leader Roddy McCuish said he had ordered officials to lift the ban on cafeteria photos.

He praised Martha as "an enterprising and imaginative pupil."

"There is no place for censorship in this council and never will be whilst I am leader," McCuish said.

The high price of lower cholesterol