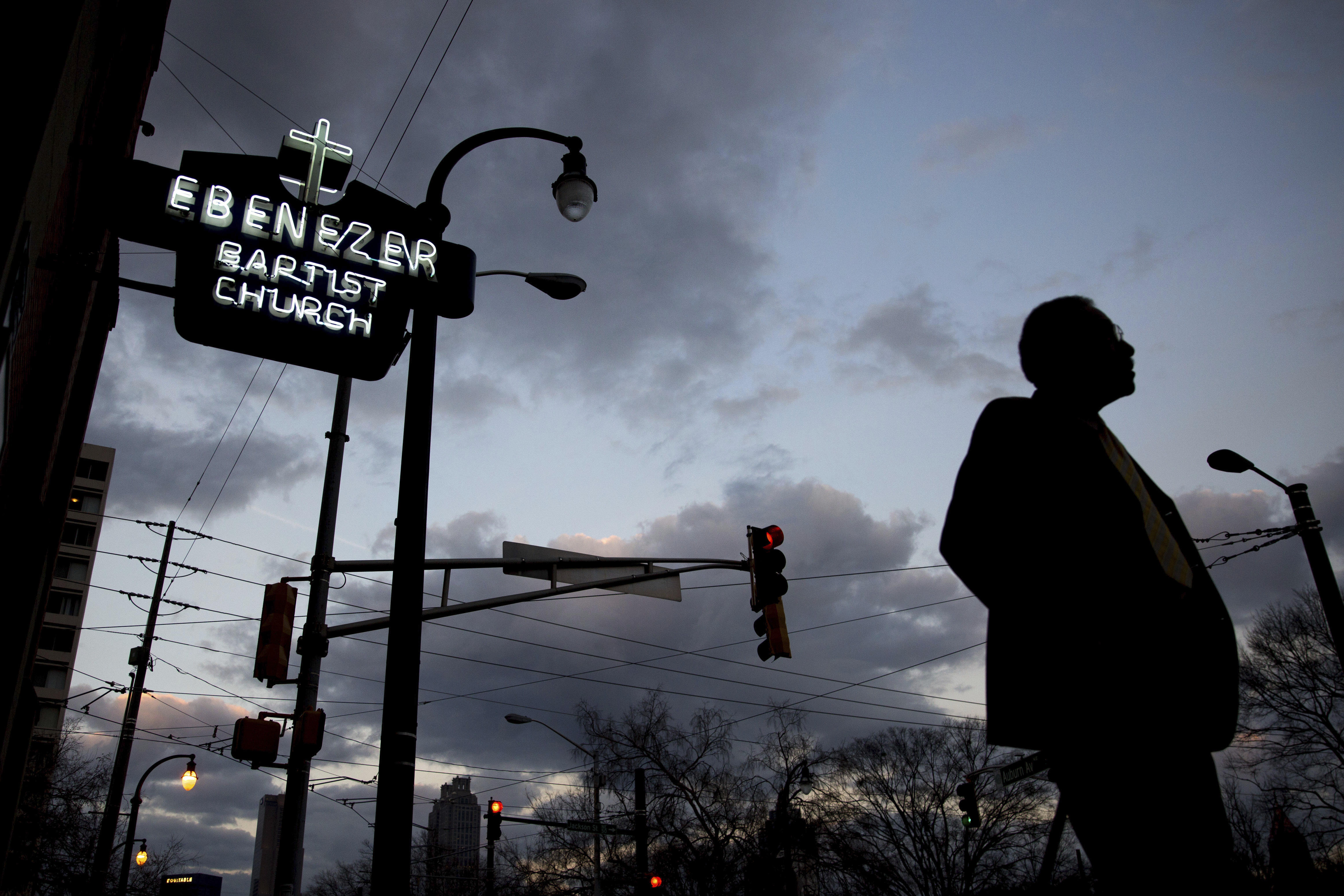 ATLANTA - Scott Shepherd didn’t fire the shot that killed Martin Luther King Jr., but the former Ku Klux Klan Grand Dragon says he has always felt remorse toward the family of the slain civil rights leader and all who honor his legacy.

He reached for atonement Monday evening, sitting on a dais next to Bernice King, who was 5 years old when James Earl Ray assassinated her father in 1968.

Trump did not publicly participate in any King observances. The holiday came amid the fallout from a public tiff between Trump and civil rights icon John Lewis, an exchange that incensed many African-Americans already leery of Trump after a racially charged campaign.

In New York, King Day observers cast establishment leaders as Klan successors. “When men no better than Klansmen dressed in suits are being sworn into office, we cannot be silent,” Black Lives Matter co-founder Opal Tometi said at a Brooklyn gathering.

Father Michael Plfeger, the man Bernice King invited to serve as keynote speaker at the Monday morning service at her father’s Ebenezer Baptist Church, sounded similar themes. He delivered a 45-minute indictment of the nation’s social and economic structure and warned it would get worse under Trump. “Plantations still exist,” Pfleger said. “And too often, white hoods have been replaced by three-piece suits in this country.”

For her part, Bernice King warned of a nation “dangerously polarized” along the lines of race and class. “We are headed to race riots if we’re not careful,” she said. “We can’t just keep this divisiveness going.”

She expressed concerns about Trump, who had met earlier in the day with her brother, Martin Luther King III.

After that private session at Trump Tower in New York, King III said Trump pledged to be an inclusive president even as he stands firm in his spat with Lewis. The Georgia congressman initially called Trump “illegitimate,” prompting the president-elect to declare on Twitter that Lewis, who was beaten during the civil rights movement, was “all talk” and “no action.”

Bernice King said Trump has demonstrated “what kind of man he is” and said any transformation is up to God. Changing the nation, she said, rests with people like Shepherd and Daryl Davis, a black musician and author who has made a second career out of befriending Klansmen and leading them to renounce their racist views.

“When two enemies are talking, they aren’t fighting,” Davis said. “It’s when the talking ceases that the ground becomes fertile for violence.”

Minutes earlier, he had unfurled a robe and held aloft the hood of a man he said was once an Imperial Wizard of the Klan, supervising multiple states until he met Davis and eventually abandoned his racist views.

Ohio Gov. John Kasich, who ran unsuccessfully for the GOP presidential nomination that Trump won, told the same crowd it’s not productive to focus on national leaders like Trump. “The problems we have in society today are right here in our own neighborhoods,” he said.

Kasich’s approach highlights some differences among those who tout King’s legacy.

Pfleger, a self-described radical priest from Chicago, said the United States must dismantle systems of oppression through collective political action. Another failed presidential candidate, Vermont Sen. Bernie Sanders, noted that King, beyond being a racial justice advocate, was an economic radical who angered the political establishment.

If there is a shared conclusion among activists, it is perhaps that realizing King’s vision involves both personal conversion and collective action, in neighborhoods and in the halls of power.

Kasich noted that national politicians, even with their limitations, control resources and react to grassroots leaders like King. Activist Chris Crass, who is white, explained that he reaches out not to avowed white supremacists, but to whites who don’t see themselves as part of the problem.

The idea, he said, isn’t to make them feel guilty, but to convince them that U.S. power brokers for generations have divided working-class whites against poor blacks as a means to maintain power. Understanding those “economic and political realities” would enable a new, powerful social and political coalition, he said.

As to whether that can occur under Trump, Davis, the man who befriends and converts Klansman, said he’s optimistic. Trump, he said, “has brought all this out,” regardless of whether he intended to do so.  Davis said many Americans assumed - or convinced themselves - that bigotry was over with Barack Obama’s election as the first black president.

“We have been in denial about racism in this country,” Davis said, “and you cannot address what you cannot see.”