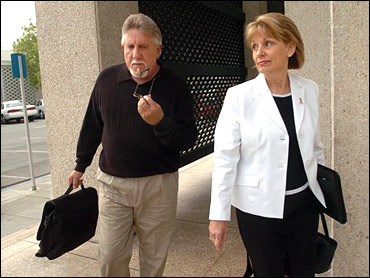 A day after his wife, Laci, disappeared, Scott Peterson told a state polygraph expert that he was not having an affair and that his marriage was fine, the expert testified Tuesday at Peterson's murder trial.

Peterson was, in fact, having an affair with a massage therapist, Amber Frey. Prosecutors have suggested that he killed his pregnant wife so that he could be with Frey.

"He said there was no third parties ... involved with him or his wife," Mansfield said.

Mansfield was not identified to the jury as a polygraph examiner

He was described only as an employee of the state Justice Department — and the context of his questioning of Peterson that day was not made clear in court. Polygraph examinations are generally not admissible as evidence.

Prosecutors allege Peterson, 31, murdered his wife and dumped the body in San Francisco Bay. He was arrested four months later, after her remains and those of her unborn child washed ashore. Peterson could get the death penalty if convicted.

He has said he was fishing when his wife disappeared.

Prosecutors spent much of last week portraying Peterson as a liar and a cheat who maintained a relationship with his mistress even after his wife vanished.

The woman who introduced Peterson to his mistress testified that when she first met him, Peterson never mentioned he was married and he told her he had "lost" his first love.

Shawn Sibley said she later set him up with massage therapist Amber Frey, the same woman who prosecutors claim was Peterson's motive to murder his wife.

Sibley said when she learned Peterson was married, she confronted him, but he continued to lie, saying he had "lost" his wife and was now unmarried.

"We learn from Sibley that Scott wept uncontrollably and that Scott begged her not to tell Amber. Some would say that Peterson showed more emotion over getting caught then about his missing wife," former prosecutor Dean Johnson told Gloria Gomez of CBS Affiliate KOVR.

The testimony was expected to set the stage for Frey, the prosecution's star witness, who may take the stand this week.

Defense lawyers say someone else abducted Laci Peterson near the couple's Modesto home as she walked the dog, and held her captive before killing her and dumping her body to frame Peterson.

The prosecution's disjointed story probably has jurors in the trial questioning what really happened to his pregnant wife, legal experts say.

But with the trial well into its second month, there may be a good reason for their failure to weave a cohesive tale: They do not have enough hard evidence to forcefully claim that Peterson committed the crime. They have no cause or time of death, no weapon and no witnesses who saw him do it.

"Those things are the heart of their story, and they just don't have it," said Robert Talbot, a professor at the University of San Francisco School of Law.

Defense lawyers, who say Peterson was framed, are confident they can pick apart the alleged motive — an affair with a woman Peterson had only known a short while.

But they are not without their own challenge: how to convincingly explain why the bodies of Laci Peterson and the couple's fetus surfaced just two miles from where Scott Peterson claims he was fishing alone the day his wife vanished.

Here's the story prosecutors have presented in the first five weeks of trial, along with some of the holes the defense has tried to poke in it:

Prosecutors claim Peterson's affair with Frey drove him to devise a plan in which he purchased his used boat weeks earlier for the sole purpose of disposing of his wife's body.

They have called several witnesses to portray Peterson as a lying cheat who wasn't ready for family life.

Defense lawyers do not deny the affair or even that Peterson was a "cad." But they say that just because Peterson cheated on his wife that did not make him a murderer. They say it's absurd to think Peterson would kill Laci to be with a single mother with whom he had been on only a few dates.

Prosecutors have not yet played for the jury the bulk of wiretapped phone conversations between Frey and Peterson that many experts say might reveal damaging details.

"Unless the wiretaps are going to make up for the holes ... prosecutors are in trouble," said Loyola Law School professor Laurie Levenson. "If they thought they were going to win this case by simply saying Scott cheats on his wife, therefore he killed her, they will lose."

Talbot said if Peterson did it, he covered his tracks "fantastically." If the bodies had not been found exactly where Peterson's alibi places him, "we wouldn't even be at trial," Talbot said.

However, Talbot said, that is a fact that is difficult to explain away.

"It's very, very powerful that the bodies were there," he said. "There's got to be some reasonable explanation, but so far we really haven't heard anything."