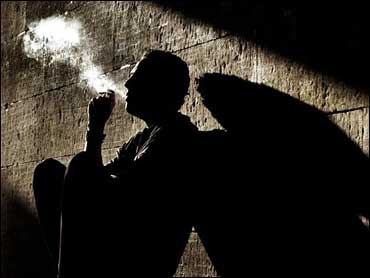 James Chambers, who doesn't smoke, calls the idea a violation of freedom.

But it's now all but inevitable for Scotland, and on Tuesday, Prime Minister Tony Blair's government will announce if it will seek a similar ban for England.

Scotland's First Minister Jack McConnell officially proposed the Scottish ban last week, and the Scottish Parliament is expected to approve it next year. Like laws in Ireland and New York, the Scottish ban would cover pubs, bars and restaurants as well as offices and public transportation.

"It's a nanny state now in Scotland, it's completely crazy," Chambers said in Oban, a port town on the rugged west coast. "People should be free to do what they like in public places."

Rowe, waiting for a bus nearby, sees it differently.

Smokers, she said, should visit cancer wards like the one where she worked "to have a look at this crime, as I call it, that they've caused by this habit."

Supporters say banning indoor public smoking will encourage smokers to quit and reduce what doctors say is the clear danger of secondhand smoke.

McConnell said Scots' health was among the worst in Europe because of poor diet - deep-fried candy bars are a beloved specialty - heavy drinking, inactivity, drug abuse and smoking - about 29 percent of adult Scots smoke.

"There'll be a lot of (nicotine) patches going about," laughed May Muir, 60, of Lerge Ayrshire, near Oban.

Under the proposal, employers or bar-owners who fail to enforce the ban could be fined up to $4,500. McConnell said officials also will consider fining smokers who repeatedly violate the law up to $1,800.

The inclusion of drinking establishments is the most contentious element. In Scotland and the rest of Britain, pubs are at the heart of social life. In the minds of many drinkers, a beer and a friendly chat go naturally with a cigarette.

At Dow's pub in Glasgow, bartender Thomas Shaw predicted a ban might drive away enough customers to kill some pubs without saving any lives.

"It won't make one iota of difference" to anyone's smoking habits, he said. "People have got to want to quit, they're not going to quit because of being told to."

The British Medical Association praised McConnell's decision, and urged a similar law for England. However, Britain's Health Secretary John Reid is considered likely to propose less sweeping measures than Scotland's, perhaps exempting pubs and bars. That would be in line with public opinion polls, which show greater public tolerance for smoke in pubs than in restaurants.

The government says smoking is the main avoidable cause of early death in Britain, killing more than 120,000 people a year. The country's 26 percent smoking rate is higher than the United States' 22.1 percent.

Wales and Northern Ireland won't be covered by the national government's proposal Tuesday. Welsh officials say they support a blanket ban and plan to seek authorization from London to implement one. There's been no talk of a broad ban for now in Northern
Ireland.