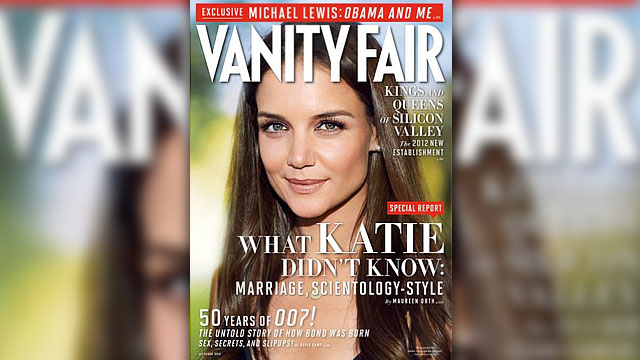 (ETonline) The Church of Scientology speaks out against shocking claims made in a recent Vanity Fair article. Sources interviewed for this in-depth story allege that in "2004, Scientology embarked on a top-secret project headed by Shelly Miscavige, wife of Scientology chief David Miscavige, which involved finding a girlfriend for Tom Cruise."

The article, written by Maureen Orth, claims that several actresses who were already members of the church, as well as Scarlett Johansson, were auditioned and audited for the part of Cruise's wife prior to him deciding to marry Katie Holmes, whom he divorced earlier this summer.

However, in an eight-page letter to Vanity Fair editor Graydon Carter, the church calls the story "shoddy journalism, religious bigotry and potential legal liability." Adding that the piece is a "disingenuous sham," the letter reads in part: "Significantly, while Maureen Orth was preparing her story, Vanity Fair ignored its staff and contributors who have firsthand knowledge of Mr. Cruise and of Mr. Miscavige and who would burden her story with the truth."

Written by Jeffrey K. Riffer of the law firm Elkins Kalt Weintraub Reuben Gartside LLP, the letter claims that Orth did not try as hard as she could have to interview the church's leader, saying: "Mr. Miscavige travels across the country and around the world almost non-stop, unlike the anti-Scientologist apostate sources who form the basis of her already-written story and who are available on a moment's notice at the press of 'send' on any anti-Scientology hate-site blog."

The letter continues: "Scientology is a new religion and its beliefs not as well known as those of more ancient history. That does not excuse you or Ms. Orth for being ignorant. Rather, it demands you be even more sensitive to finding out what the true beliefs are of Scientology-which can only be told by the religion itself. Just because you don't think you are bigoted doesn't mean you aren't. Bigotry and ignorance go hand in hand and you are definitely and wilfully ignorant of the actual beliefs of Scientology and the activities of its Churches."

Written prior to the publishing of the VF story, the letter does threaten legal action against the acclaimed publication, reading: "If Vanity Fair goes forward with publication of such defamatory allegations, now that it is on notice that the story is false, the stain on its reputation will last long after any reader even remembers the article. The sting of the jury verdict will last longer still; far longer than any pleasure from racing to publish a poorly researched and sourced story."

Cruise's lawyer Bert Fields has also denied the claims, though the magazine seems to be standing by its story.