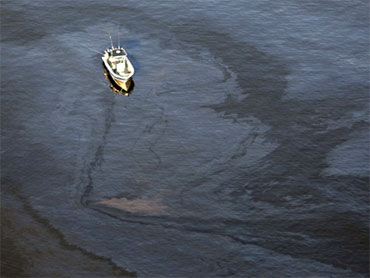 Georgia scientists say their analysis shows that most of that BP oil the government said was gone from the Gulf of Mexico is still there.

The scientists say as much as 80 percent of the oil still lurks under the surface. The Georgia team said it is a misinterpretation of data to claim that oil that is dissolved is actually gone. The report from University of Georgia and other scientists came from an analysis of federal estimates.

Earlier this month federal scientists said that only about a quarter of the oil remained and the rest was either removed, dissolved or dispersed.

"Where has all the oil gone? It hasn't gone anywhere. It still lurks in the deep," said University of Georgia marine scientist Chuck Hopkinson. He headed the quick independent look by the Georgia Sea Grant program at the estimates the White House released.

The Georgia team said it is a misinterpretation of data to claim that oil that is dissolved or dispersed is gone.

"The bottom line is most of it is still out there," Hopkinson told The Associated Press. "There's nothing in the report to substantiate the 26 percent."

But commercial shrimpers out for the first trip of the season since the spill indicated their catch was plentiful and free of oil.

"We're not seeing any oil where I'm at. No tar balls, nothing," said Brian Amos, a 53-year-old shrimper who trawled in his 28-foot skiff, The Rolling Thunder, in a bay near Empire.

Laboratory tests on seafood from the Gulf have shown little hazard from oil, and a test is being developed for the chemicals used to disperse the crude, though there is no evidence they build up in seafood. Still, shrimpers are worried that the public won't want what they catch.

"I feel that we have had a bad rap on the perception of our product," said Andrew Blanchard, who waited Monday for shrimp boats to arrive at his processing plant in Chauvin. Fewer arrived than normal, five versus the usual 20 on a normal opening day, but he said that was because most boats are still doing cleanup work for BP, not because of any problem with the shrimp.