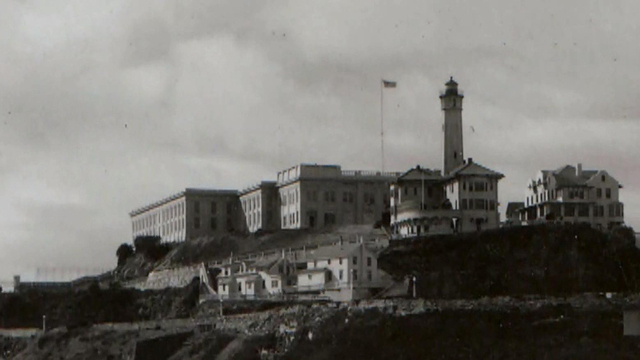 A prison break 52 years ago is still one of America's great mysteries. The convicts who escaped from the notorious Alcatraz prison were never heard from again.

A scientific gathering like the annual meeting of the American Geophysical Union seems an unlikely place to discuss a legendary prison break, but three Dutch scientists came with a new theory about the escape from Alcatraz, made famous in the 1979 Clint Eastwood movie.

"I've seen the movie when I was 11 years old and I think everybody has seen the movie in the '70s with Clint Eastwood," Olivier Hoes of the Deltares Research Institute said.

The movie tells the story of inmates Frank Morris and brothers John and Clarence Anglin. In 1962, they used spoons to dig through the prison walls, left dummies in their beds and slipped into San Francisco Bay in a raft made from raincoats.

"It's a myth that grabs the attention," Delft University of Technology's Rolf Hut said. "Everything is known about how they escaped from their cells and how they moved over the roof and how they built their raft and then they entered the water and then poof. Nothing anymore."

There have been many theories, but most end with the three escapees being swept to their death by the powerful tide.

"And what we did, we added a little bit of science to distinguish the plausibility of all these different theories," Hut said.

Using sophisticated new computer models and historical data on tides and currents, the scientists found that with the right timing, the three could have made it to safety landing near the foot of the Golden Gate Bridge.

Michael Esslinger, who has written a history of the prison, was for many years skeptical the three had survived.

"I was an advocate that it was, stop, these guys could not have made it," Esslinger said.

But new information like that from the three Dutch scientists has changed his mind.

"And I really believe today that their story now begins when they hit the water," Esslinger said. "These guys have pretty much become folk heroes. I mean they're of the fabric of our history."

They're folk heroes who have a lot of folks thinking they made it safely to shore.

"As a scientist, I don't care about what happened; I just want to show that we can do this," Hut said. "Given that we've never heard of them again, either they died or they made landfall and led a peaceful life not being a criminal anymore."

Alcatraz closed as a prison in 1963, but this mystery remains open.