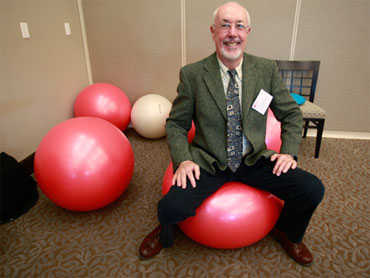 As you might expect at a conference on the health dangers of sitting, most of the seats were empty.

It was well attended, but the scientists and health experts who did gather Thursday at Stanford University were encouraged to get up from their chairs, stretch their legs, pace the room, even stand during discussions ranging from the risks of inactivity to technological solutions for reducing time on one's behind.

"Certainly the irony of having everyone sit through a conference on the perils of sitting was not lost on us," said Anne Friedlander, a consulting professor of human biology at Stanford and an organizer of the two-day conference entitled The Science of Sedentary Behavior.

Friedlander opened the event by telling participants that they could monitor their sit-time on a timer displayed on a big screen behind the lectern. Alternative seating, including exercise balls, was also available. A campus walking tour would end the day.

"It's almost impossible to sit down for long periods when you know what's going on in your body while you're sitting," Friedlander said.

Although much of the research into the health risks is preliminary, several studies suggest that people who spend prolonged periods on their behind are more likely to be overweight, have heart disease or even die.

Inactivity, the studies also say, decreases circulation and the body starts shutting down on a metabolic level.

The goal of the conference was to discuss the existing science on the topic and what research is still needed.

Neville Owen, professor of health behavior at the University of Queensland in Australia, said much of the research into sedentary behavior also has focused on weight gain or loss. Another goal of the conference is to approach the subject more broadly, knowing that preliminary research shows that prolonged sitting effects more than just your waistline, he said.

"We can't let ourselves get sucked in to one particular track," Owen said. "That's just not the whole story."

Participants were quick to note challenges to new research, including separating the many variables that can influence bad health from the sole act of sitting.

"We know there are links between too much sitting and risks to health," said David Dunstan, an associate professor at the Baker IDI Heart and Diabetes Institute in Melbourne, Australia. "But we have yet to figure out the exact causes and to what effect."

There's also no consensus on how much sitting is too much, though there is evidence suggesting that interrupting periods of prolonged sitting with frequent breaks is beneficial.

Marc Hamilton, a professor of inactivity physiology at the Pennington Biomedical Research Center in Baton Rouge, La., said the science needs to get to the point where policymakers can issue guidelines that will help people make healthful choices.

He drew a comparison to research on sun burns.

"How much sun exposure is too much? No one really knows, but we've gotten to a point where we can say confidently that we should limit our time in the sun," Hamilton said.

While the academics didn't have all the answers, the conference made one thing clear: they're not about to sit around waiting for them to fall into their laps.