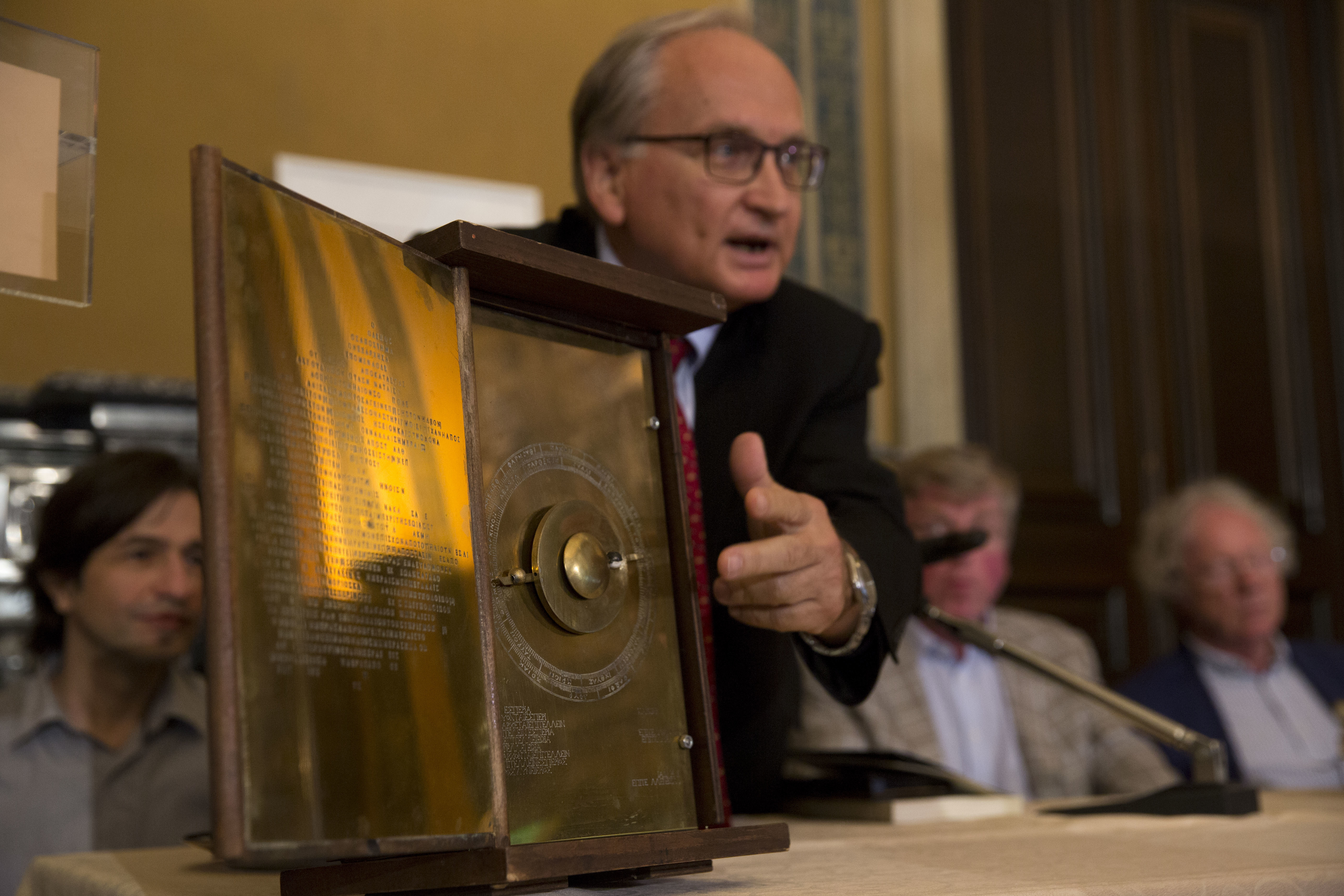 ATHENS, Greece -- When you're trying to fathom a mangled relic of very old hi-tech, it helps to have the manufacturer's instructions.

For over a century since its discovery in an ancient shipwreck, the exact function of the Antikythera Mechanism -- named after the southern Greek island off which it was found -- was a tantalizing puzzle.

From a few words deciphered on the twisted, corroded fragments of bronze gears and plates, experts guessed it was an astronomical instrument. But much more remained hidden out of sight.

After more than a decade's efforts using cutting-edge scanning equipment, an international team of scientists has now read about 3,500 characters of explanatory text -- a quarter of the original -- in the innards of the 2,100-year-old remains.

They say it was a kind of philosopher's guide to the galaxy, and perhaps the world's oldest mechanical computer.

"Now we have texts that you can actually read as ancient Greek, what we had before was like something on the radio with a lot of static," said team member Alexander Jones, a professor of the history of ancient science at New York University.

"It's a lot of detail for us because it comes from a period from which we know very little about Greek astronomy and essentially nothing about the technology, except what we gather from here," he said. "So these very small texts are a very big thing for us."

"It was not a research tool, something that an astronomer would use to do computations, or even an astrologer to do prognostications, but something that you would use to teach about the cosmos and our place in the cosmos," Jones said. "It's like a textbook of astronomy as it was understood then, which connected the movements of the sky and the planets with the lives of the ancient Greeks and their environment."

"I would see it as more something that might be a philosopher's instructional device."

The letters -- some just 1/20 of an inch tall -- were engraved on the inside covers and visible front and back sections of the mechanism, which originally had the rough dimensions of an office box-file, was encased in wood and operated with a hand-crank.

It wasn't quite a manual, more like a long label you would get on a museum to describe a display, according to another team member, Mike Edmunds, who is an emeritus professor of astrophysics at Cardiff University.

"It's not telling you how to use it, it says 'what you see is such and such,' rather than 'turn this knob and it shows you something,'" he said Thursday, during a presentation of the team's findings in Athens.

The mechanism's fragments were raised in 1901 from a mid-1st century B.C. shipwreck, and at first seemed like a scruffy footnote to a magnificent body of finds that included bronze and marble statues, luxury glassware and ceramics.

But the sediment-encrusted, compacted lumps soon attracted scientific attention, and were studied by successive teams over the next decades. While hypotheses were made as to the functioning of the gears and the use of the machine, it was for long impossible to read more than a few hundred characters of the texts buried on the inside of a multi-layered mechanism a bit like a big clock.

About 12 years ago, Jones' and Edmunds' team started to use x-ray scanning and imaging technology to analyze the 82 surviving fragments.

"The original investigation was intended to see how the mechanism works, and that was very successful," Edmunds said. "What we hadn't realized was that the modern techniques that were being used would allow us to read the texts much better both on the outside of the mechanism and on the inside than was done before."

It was a painstaking process, as to read each of the tiny letters, researchers had to look at dozens of scans.

Edmunds said the style of the text -- formal and detailed -- implied that it was designed to be much more than a rich collector's plaything.

"It takes it to me out of the realm of executive toys -- an executive wouldn't pay all that money to have all that waffle - it's more serious than a toy," he said.

It was probably made in Greece between 200 and 70 B.C., although no maker's signature has been found.

The team says they have read practically all the text on the surviving fragments. Their greatest hope is that archaeologists currently revisiting the shipwreck will uncover pieces overlooked by the sponge divers who found it a century ago - or even another similar mechanism.

The commercial vessel was a giant of the ancient world -- at least 130 feet long -- and broke into two as it sank, settling on a steep underwater slope about 164 feet deep.

Most of the inscriptions, and at least 20 gears that worked to display the planets, are still there.

"Perhaps, at some point, our reading may be fleshed out by sections retrieved from the sea," said team member Yanis Bitsakis.