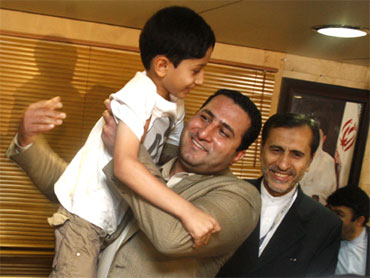 An Iranian nuclear scientist who returned home last week from the United States provided valuable information about the CIA, a semiofficial news agency reported Wednesday, adding that his spy's tale would be made into a TV movie.

American authorities have claimed Shahram Amiri willingly defected to the U.S. but changed his mind and decided to return home without the $5 million he had been paid for what a U.S. official described as "significant" information about his country's disputed nuclear program.

The Fars news agency, which is close to Iran's powerful Revolutionary Guard, quoted an unidentified source as saying Iran's intelligence agents were in touch with Amiri while he was in the U.S. and that they won an intelligence battle against the CIA.

Iran has portrayed the return of Amiri as a blow to American intelligence services that it says were desperate for inside information on Iran's nuclear program. Iran has sought to make maximum propaganda gains from the affair, allowing journalists to cover Amiri's return, sending a senior Foreign Ministry official to greet him and preparing to make a movie about the story.

"This was an intelligence battle between the CIA and us that was designed and managed by Iran," the source was quoted as saying. "We had set various goals in this battle and, by the grace of God, we achieved all our objectives without our rival getting any real victory."

Amiri claims he was kidnapped by American agents in May 2009 while on a pilgrimage to holy Muslim sites in Saudi Arabia.

The Fars report suggests Amiri had been planted to discover how much information the U.S. had gathered about Iran's nuclear program, which Washington believes is aimed at weapons production. Iran says its nuclear work is only for energy production and other peaceful purposes.

"We sought to obtain good information from inside the CIA. While Amiri was still in the U.S., we managed to establish contact with him in early 2010 and obtained very valuable information accordingly. He was managed and guided (by us)," the source told Fars.

"Iran's intelligence agencies now possess valuable details from inside the CIA, which is a great victory," it said.

To support the claim, the source mentioned the license plate numbers of two cars used by the CIA in Virginia, claiming that some CIA locations, individuals and contacts have been identified.

The source also claimed that the CIA has been blackmailed by various sources, including Iran's opposition group the People's Mujahedeen.

Amir Hossein Ashtianipour, director of Sima Film, was quoted by Fars as saying that a group of young graduates have been hired to write the script.

Meanwhile, Iran's nuclear agency said Wednesday it will conduct scientific studies for the construction of an experimental nuclear fusion reactor, an engineering challenge that no nation has yet overcome.

Iran is not known to have carried out anything but basic fusion research, and any advancement in the technology would be a significant achievement for Tehran's atomic program.

The world's physicists have been trying for half a century to create fusion, which produces no greenhouse gas emissions and only low levels of radioactive waste.

To meet the immense expense involved, the United States, the European Union, China, India, Russia, Japan and South Korea have teamed up to build an experimental fusion reactor in southern France.