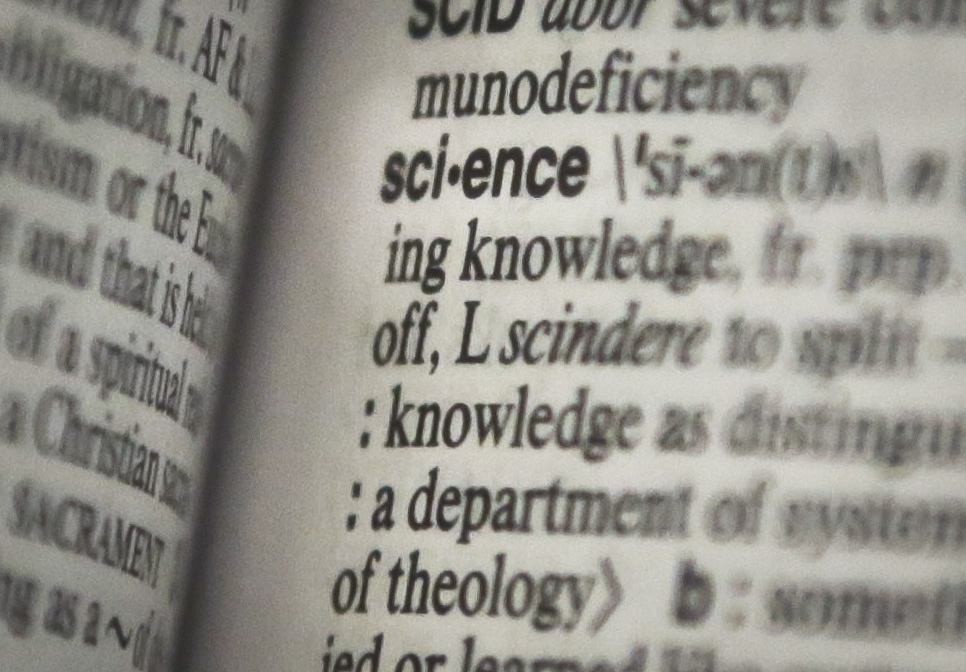 NEW YORK -- Look alive, selfie. There's another word of the year that's not all about you.

While Oxford University Press, the British publisher of the Oxford dictionaries, declared those little smartphone self-portraits its winner last month, the folks at Merriam-Webster announced "science" on Tuesday.

Oxford tracked a huge jump in overall usage of selfie, but Merriam-Webster stuck primarily to look-ups on its website, recording a 176 percent increase for science when compared with last year.

"The more we thought about it, the righter it seemed in that it does lurk behind a lot of big stories that we as a society are grappling with, whether it's climate change or environmental regulation or what's in our textbooks," said John Morse, president and publisher of Merriam-Webster Inc., based in Springfield, Mass.

Science, he said, is connected to broad cultural oppositions - science versus faith, for instance - along with the power of observation and intuition, reason and ideology, evidence and tradition. Of particular note, to Merriam-Webster, anyway, is fallout from the October release of Malcolm Gladwell's latest book, "David and Goliath: Underdogs, Misfits, and the Art of Battling Giants."

Gladwell, a popularizer of scientific thought and research in best-sellers and The New Yorker magazine, takes on the challenges of obstacles and the nature of disabilities and setbacks in the book. But he leaves science itself - according to some critics - as a rhetorical device for his main mission of storytelling.

Last month, "CBS This Morning" co-host Norah O'Donnell asked Gladwell about the science behind his books. Many critics have said that he picks and chooses which data to use in order to support the narrative and doesn't always show both sides. He told O'Donnell that there are two instances in his new book in which he relies "heavily on science."

"On the class-size discussion, I used a meta analysis of 300 studies - that's not cherry picking. The second case is when I talk about the three strikes law in California and I review the entire literature and give all references to it," he said. "People use that and I always ask them, give me an example and they never can.... I think people say that as a way of saying, 'Oh, I just disagree with what you're saying."

The tweets, blog posts and online commentary about the book - yay and nay - proliferated as Gladwell hit the road to promote it. Peter Sokolowski, a lexicographer and editor at large for Merriam-Webster, called the Gladwell dustup a symptom of where science stands today.

With the explosion of information and technology, are we all scientists?

"You have scientists writing long pieces, purportedly reviews of his new book, basically criticizing him, and then his response is: 'Hey, buddy. I'm not a scientist. I'm a writer who's trying to promote the work of scientists. To contextualize it. To make it accessible.' You know, 'Don't blame me for not being a scientist' is basically his response," Sokolowski said.

Jason Silva is neither scientist nor academic. He's a "techno optimist," filmmaker, "performance philosopher" and host of the popular "Brain Games" show on the National Geographic Channel.

"Ooh, that's awesome," he said upon learning of science's dictionary shout-out. "People are increasingly scientifically minded, and that makes me very happy."

Count him among those who believe art and science are two sides of the same coin. Right now, thanks to the digital ease of sharing information and the explosion of technology, "The world is infinite. You can indulge your curiosity."

Are more people looking to science for inspiration, hence looking up the word on a dictionary website for solace or motivation?

"We bear witness to the astonishing capacities for scientific knowledge to aid us in transcending our seeming boundaries, to realize they're not really boundaries," Silva offers. "It's a great thing. Let's celebrate that."