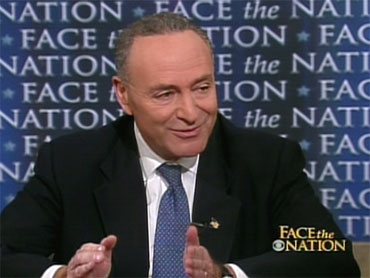 (CBS)
New York Senator Chuck Schumer was reportedly waiting to take off on a flight from D.C. to New York Sunday when a flight attendant told him to turn his phone off.

According to the Republican aide who was apparently sitting nearby and told the story to Politico, both Schumer and his seatmate – fellow New York Democratic senator Kirsten Gillibrand – kept talking on their phones regardless.

Then the flight attendant came by again and told Schumer that everyone on the flight was waiting for him to turn off his phone. He asked to finish his conversation but was told he could not; he then hung up and, according to the GOP aide, argued about the rule banning him from speaking on the phone.

When the flight attendant walked away, the aide told Politico, Schumer turned to Gillibrand and referred to the woman as a "bitch."

Schumer spokesman Brian Fallon seems to be confirming the story; he told Politico that Schumer "made an off-the-cuff comment under his breath that he shouldn't have made, and he regrets it."

Perhaps the best detail of the story? The aide claims the phone rang again after Schumer finally hung up.

"It's Harry Reid calling," he said, according to the aide. "I guess health care will have to wait until we land."