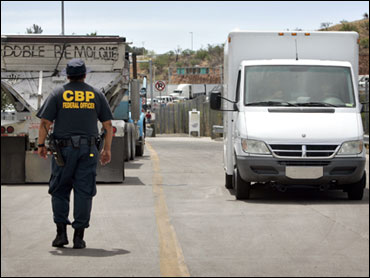 (AP/Matt York)
During the debate over immigration reform in Congress over the past few years, certain parties have consistently pointed to border security as a top priority, as the Associated Press points out. The continuing debate over what constituted adequate border security was a major reason why the immigration bill failed three times.

But according to Sen. Chuck Schumer (D-NY), the borders are now safe enough to take a step forward. "We can pass strong, fair, practical and effective immigration reform this year," he said following a hearing on border security Wednesday.

Customs and Border Protection said that the number of people arrested while illegally crossing the Mexican border dropped 27 percent from the same period since last year. Along the Canadian border, the number of arrests was down 13 percent.

The shrinking labor market in the U.S. plus tougher border enforcement caused the number of undocumented immigrants to fall, said Schumer.

Under Bush Administration policies, more undocumented immigrants are getting deported than ever before, according to the Washington Post.

The Post reports that President Obama's immigration policies do not depart too far from those of his predecessor. The major difference is the Obama administration's plan to limit Immigration and Customs Enforcement raids at workplaces.

Mr. Obama supports a "virtual fence" of sensor towers along the Mexican border and the "zero tolerance" jailing and deportation of apprehended undocumented immigrants.

The president has invited members of Congress to the White House on June 8 for a meeting about immigration reform.