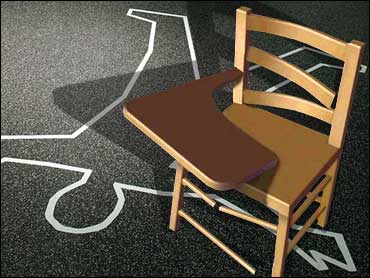 Staff members of a Tennessee elementary school staged a fictitious gun attack on students during a class environmental field trip, telling them it was not a drill as the children cried and hid under tables.

The mock attack Thursday night was intended as a learning experience and lasted five minutes during the weeklong trip to a state park, said Scales Elementary School Assistant Principal Don Bartch, who led the trip.

"We got together and discussed what we would have done in a real situation," he said.

But some parents of the sixth-grade students, who are about 11 years old, were outraged.

"The children were in that room in the dark, begging for their lives, because they thought there was someone with a gun after them," said Brandy Cole, whose son went on the trip.

In a press release posted on the its Web site, the school said the prank was an annual tradition that the students had been expecting, and that the "lead teacher" had made references to an upcoming prank during the preceding week.

Most of the students celebrated after the discussion following the prank, said the press release, but a few seemed upset. They were comforted by the teachers. "No children asked to call their parents or go home early."

Some parents said they were upset by the staff's poor judgment in light of the April 16 shootings at Virginia Tech that left 33 students and instructors dead, including the gunman.

The school's press release says only six of the 42 parents who attended a briefing on the trip Saturday afternoon made comments to the principal. Of those, "four were obviously concerned and two were supportive."

During the last night of the trip, staff members convinced the 69 students that there was a gunman on the loose. They were told to lie on the floor or hide underneath tables and stay quiet. A teacher, disguised in a hooded sweat shirt, even pulled on a locked door.

After the lights went out, about 20 kids started to cry, 11-year-old Shay Naylor said.

The school's press release says "the coverage has been sensationalized," but "this prank crossed the line in what would be appropriate to tell young children, especially in light of recent incidents."