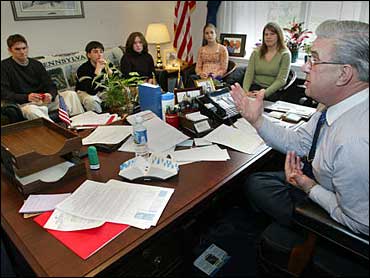 Sixteen-year-old Garrett Dush says he doesn't take drugs and wouldn't mind being tested for them at school under a program being championed by President Bush.

But Garrett's father, Cris Dush, is concerned about how his son, a high school sophomore from Brookville, Pa., or other students would be selected for testing.

"It'd have to be random," says Cris Dush, who works at a state prison outside of Brookville, about 80 miles northeast of Pittsburgh. "If the kid is going to feel targeted ... I wouldn't want that."

The idea of steering America's kids clear of drugs has broad support. But the $23 million White House plan to increase testing in schools is drawing sharp criticism from some parents, school administrators and civil liberties activists.

Mr. Bush's plan, unveiled last week in his State of the Union speech, would expand a $2 million program that last year funded drug testing in eight school districts. A Supreme Court case in 2002 upheld the authority of schools to test students who participate in extracurricular activities, like sports teams.

Federal guidelines under which those students are tested have been kept deliberately vague to give schools and communities broad discretion. But the president and his drug policy director insist test results be kept confidential.

"The aim here is not to punish children, but to send them this message: 'We love you, and we don't want to lose you,'" President Bush said.

Word can still get out, according to some administrators as well as critics. That's troubling to civil liberties groups who say children who need help could end up in jail instead.

"They're saying this is to help, not punish," said Ethan Nadelmann, executive director of the Drug Policy Alliance in New York, which fiercely guards against government privacy violations and questions the effectiveness of drug testing. "But it always starts with that. And inevitably, the next shoe to drop is: 'We need to punish people in order to help people.'"

In Nelson County, Ky., all high school athletes in fall sports were tested for drugs at the beginning of the school year, followed by two more rounds of tests for randomly selected athletes. This spring, students involved in other extracurricular activities — like band or yearbook — also will start random testing, said Karen Johnson, the school district's director of federal grants.

"It's been accepted very well," Johnson said. The county received $284,203 from the federal government last year to help pay for drug testing.

"If students want to play sports, they know they have to be clean," she said. "A lot of times, drug use is the result of peer pressure. But if they have a reason, they can say, 'I can't do that.' It gives them an out without looking like they're a nerd or something."

Students who test positive are temporarily pulled off their team and receive counseling from a school adviser, Johnson said. Police are not called, and students rarely, if ever, risk being suspended or expelled from school, she said.

Already, Republican lawmakers, led by Rep. John Peterson of Pennsylvania, are pushing legislation they envision could let school districts randomly test all students grades 8-12 — not just those in after-school activities.

For whatever reason, drug use among junior- and senior-high school students has been on a two-year decline, a recent University of Michigan study showed.

Less than half of school districts test any students for drugs, said Paul Houston, executive director of the American Association of School Administrators. Those that do have scant resources to follow up with medical intervention.

"We've got school districts who think it's wonderful, and are doing it, and others who think it's terrible," said Houston, whose Arlington, Va.-based group represents 14,000 school superintendents nationwide. "It sort of depends on the local communities, their values."

In most cases, students who test positive are sent to school counselors instead of doctors for intervention and treatment, said Julie Underwood, general counsel for the National School Boards Association. For the most part, she said, schools "are real good about student privacy," but word of a positive drug test can still get out.

"Students probably know," Underwood said. "For many school administrators, it may not be a concern, because part of the total picture is making sure that students understand the negative consequences of drug use."

She said it's unlikely that school districts shield all positive drug tests from the law.

But to Garrett Dush and three other Brookville teens who were in Washington last week, that doesn't matter much.

"I don't think you have to worry about it if you're not doing it," Garrett said. "So it wouldn't be a big deal if any of your friends found out your test results."