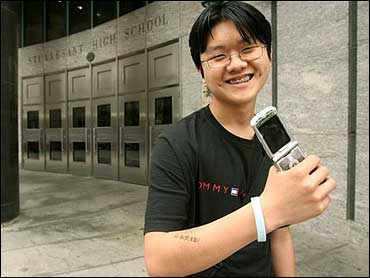 Elizabeth Casanola carries her cell phone everywhere — even through the metal detectors at her school.

The high school senior puts the phone under her pants by her waistline, where she knows she won't be patted down. Or she smuggles the phone into school in pieces — the battery separate from the main body.

A ban on cell phones in the nation's biggest school system is creating an uproar among parents and students alike, with teenagers sneaking their phones inside their lunches and under their clothes, and grown-ups insisting they need to stay in touch with their children in case of another crisis like Sept. 11.

Parents have written angry letters and e-mails, staged rallies and news conferences, and threatened to sue. Some City Council members are introducing legislation on their behalf.

But Mayor Michael Bloomberg and Schools Chancellor Joel Klein have staunchly refused to drop the ban. They insist cell phones are a distraction and are used to cheat, take inappropriate photos in bathrooms and organize gang rendezvous. They are also a top stolen item.

Students have refused to give up their phones, saying the devices have become too vital to their daily existence and to their parents' peace of mind.

"My mother, she needs me to have the cell to call me and check up on me," said Steven Cao, 16, a sophomore who lives in Staten Island and attends Stuyvesant High School in Manhattan. He called the ban stupid.

Some parents would prefer a policy that lets students have cell phones but prohibits their use in classes.

New York's 1.1-million-student school system has banned beepers and other communication devices since the late 1980s. But schools have long used an "out-of-sight, out-of-trouble" approach. Then, late last month, city officials began sending portable metal detectors every day to a random but small set of schools to keep out weapons. And the detectors have led to the confiscation of hundreds of cell phones.

New York has one of the country's toughest policies on student cell phones. It also bans other electronic devices, such as iPods.

Detroit bans cell phones, and a two-time violator will not get the phone back. Boston relied on a school-by-school approach until recently, when it changed the policy to let students have a phone, but only if it is turned off and out of sight. Los Angeles lets kids have cell phones, but they can use them only during lunch and breaks.

Kenneth Trump, president of Ohio-based National School Safety and Security Services, said his research indicates most schools ban the phones. Others require students to turn off the devices during school hours.

"Every kid today does carry a cell phone," said Howard Lucks, principal of New Utrecht High in Brooklyn. "The kids keep them in their backpacks, their pockets. As soon as they see an administrator or teacher, they put it away very quickly."

Even at schools with permanent metal detectors, students find ways to sneak the phones inside.

Once inside the school, another tactic is to hide the phone in a sandwich roll, according to one principal. Some students leave phones at nearby stores that charge small holding fees.

Yen Ramirez, a junior at Manhattan's Washington Irving High, said students need their phones for emergencies. The ban is a problem "because you never know what could happen."

Students insist that most classmates use their cell phones responsibly, and they brush off criticism that previous generations got along fine without them.

"It's kind of ridiculous that we think we can't survive without a cell phone when people did it for thousands of years," said Elisa Muyl, 14, a freshman at Stuyvesant. "But now that they have this invention, we should use it."