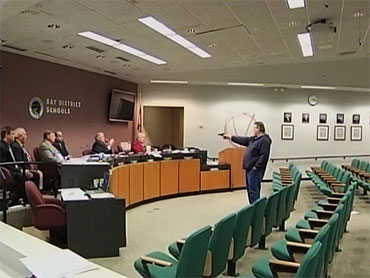 Bill Husfelt sat just feet away from an armed ex-convict who was set on ending his life. But after Clay Duke fired two shots from close range, Husfelt was unharmed, leaving him in awe of his narrow escape from death.

"God blocked the bullet. And I'm not saying that facetiously. I really believe that," Husfelt, the Bay City Schools superintendent, told CBS' "The Early Show" Wednesday.

Tuesday evening's school board meeting began normally, with the board in the midst of a discussion before Duke walked to the front of the room, spray painted a red "V" with a circle around it on the white wall, then turned and waved a handgun. He calmly ordered everyone to "hit the road" except the men on the board sitting behind a long beige desk.

Husfelt tried to persuade Duke to drop the gun, but the 56-year-old Duke just shook his head, blaming officials for his wife being fired.

Before the shooting, board member Ginger Littleton, who initially exited the meeting, snuck back in and tried to disarm Duke, swinging her purse at his arm holding the gun.

"I knew that he had the gun right there. There wasn't anything I could do. My plan A was to try to get the gun away from him. Unfortunately, because I'm probably not smarter than the average bear, I did not have a plan B," Littleton told "Early Show" co-anchor Harry Smith.

Littleton's attempt was unsuccessful. Duke, a large, heavyset man dressed in a dark pullover coat, got angry, turned around, and she fell to the floor, as board members pleaded with her to stop. Duke pointed the gun at her head and said, "You stupid b--" but he didn't shoot her, she said.

Littleton said she it was her concern for her defenseless colleagues that drove her to take such a risk.

"Their shield was a three-ring binder and [their] lethal weapon was a ballpoint pen. They were lined up like ducks in a pond. And this guy was very scary. So, I could either leave and I knew something bad was going to happen. I could either leave and try to live with myself if it did or go back and try to at least delay or divert until we could get some help," she said.

In his brief exchange with the board, Duke said his wife had been fired from the northern Florida district, but never told Husfelt or the board who she was or her job. Members promised to help her find a new job, but Duke just shook his head. Husfelt told Duke he would be responsible for her dismissal, so the board members should be allowed to leave.

Husfelt in the exchange on video tells Duke: "I've got a feeling you want the cops to come in and kill you because you said you are going to die today." Later, the head of more than 30 district schools said he was sure someone was going to be killed.

"He had that look that, you know, it's very hard to describe, but he knew what was going to happen. He told us he was going to die. And in many different ways told us we were going to die," Husfelt told "The Early Show."

Husfelt said he was only trying to delay Duke until help could arrive.

"We knew our safety officer was in the building. I'd already seen him. And we knew that everybody was calling 911. So, the only thing we had was … And we just tried to do everything we could to talk to him. But he had that look in his eyes. He decided this was not going to end well."

Video showed Duke slowly raise the gun and leveling it at Husfelt, who pleaded "Please don't, please don't," before Duke squeezed off two rounds that amazingly missed his target.

After the shots were fired, security guard Mike Jones bolted in and exchanged gunfire with Duke, wounded him in the leg or side. Duke then fatally shot himself, police Sgt. Jeff Becker said. Somehow, no one else who remained in the small board room was injured in the clash that lasted several minutes, and Husfelt said at least two rounds lodged in the wall behind him.

"It was very surreal but we're slowly digesting it," Husfelt said.

SWAT officers then storm the room and order everyone onto the ground. School officials tell them that Duke is shot and appears dead. His feet can be seen near the board's seats. The district said Jones would not be available for an interview.

As for the V inside a circle that Duke painted, it's the same symbol used in the graphic novel series and movie "V for Vendetta," though police didn't talk about his motive.

On a Facebook page under Duke's name, which was apparently created Dec. 7, he left a cryptic message under the "About Me" section.

"My testament: Some people (the government sponsored media) will say I was evil, a monster (V) ... no ... I was just born poor in a country where the Wealthy manipulate, use, abuse, and economically enslave 95 percent of the population. Rich Republicans, Rich Democrats ... same-same ... rich ... they take turns fleecing us ... our few dollars ... pyramiding the wealth for themselves."

The Facebook page's profile picture shows the same red V symbol that was spray-painted on the wall during the school board meeting. The page also shows photos from the film "V for Vendetta," in which a mysterious figure battles a totalitarian government.

Duke was charged in October 1999 with aggravated stalking, shooting or throwing a missile into a building or vehicle and obstructing justice, according to state records. He was convicted and sentenced in January 2000 to five years in prison and was released in January 2004. Records show Duke was a licensed massage therapist before his arrest but it wasn't clear if he was employed.

Attorney Ben Bollinger, who represented Duke during his trial, told The News Herald of Panama City that Duke was waiting in the woods for his wife with a rifle, wearing a mask and a bulletproof vest. She confronted him and then tried to leave in a vehicle, and Duke shot the tires. He said that as part of his sentence, Duke was required to complete psychological counseling. Bollinger did not immediately return a phone message from the AP.