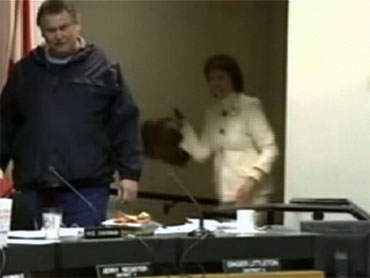 The Florida school board member who used her large purse to try to disarm a gunman at a board meeting yesterday said on CBS' "The Early Show" that after she hit the shooter, she was afraid her life was over.

"My plan A was to try to get the gun away from him," Ginger Littleton, the only female member on the board of Bay City Schools in north Florida. "Unfortunately, because I'm probably not smarter than the average bear, I did not have a plan B."

She had been allowed to leave the board room, but sneaked back in behind the gunman. Littleton has said she saw it as the last opportunity to "divert him." Her effort failed, and the gunman cursed at her and pointed his gun at her, but didn't shoot her.

Clay Duke - who had been complaining about taxes and about his wife being fired - then shot from close range at the school superintendent.

No bullets hit anyone before a security guard shot the gunman, who then killed himself.

The superintendent, Bill Husfelt, says he could "tell by the look in his eyes that this wasn't going to end well."

Littleton told "Early Show" anchor Harry Smith that she had to try and help because her fellow members of the school board were so vulnerable.

"Their shield was a three-ring binder and lethal weapon was a ballpoint pen. They were lined up like ducks in a pond. And this guy was very scary," Littleton said. "So, I could either leave and I knew something bad was going to happen. I could either leave and try to live with myself if it did, or go back and try to at least delay or divert until we could get some help."

Duke, a large, heavyset man in a dark pullover coat got angry and turned around. She fell to the floor as board members pleaded with her to stop. Duke pointed the gun at her head and said, "You stupid b----" but he didn't shoot her. She's not sure why.

"I think the 'you stupid' part, I thought at that point, probably, you're right. I was pretty stupid," Littleton told NBC's "Today" show early Wednesday.

Duke shot twice at Husfelt from about 8 feet away and squeezed off several more rounds before district security chief Mike Jones, a former police officer, bolted in. He exchanged gunfire with Duke and wounded him in the leg or side before Duke fatally shot himself, police Sgt. Jeff Becker said.

Somehow, no one else in the small board room was injured in the clash that lasted several minutes. Husfelt said at least two rounds lodged in the wall behind him.