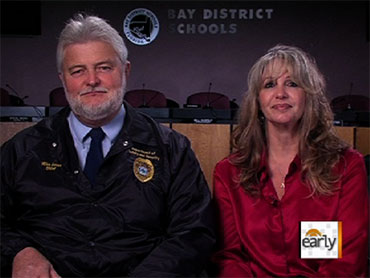 When you watch video of Tuesday's school board shooting in Panama City, Fla., it's hard to believe no one was killed or injured -- except for the gunman, 56-year-old Clay Duke, who took his own life in the end.

Mike Jones, security chief at the Bay District School, is being hailed as a hero after risking his own life to make sure everyone else was safe.

Jones and his wife, Colleen, appeared on "The Early Show" Friday from Panama City.

Jones said his biggest fear during the gun fight was that the Bill Husfelt, the superintendent, was dead.

Jones told "Early Show" co-anchor Harry Smith, "He had his back to me -- Mr. Duke did -- and when I seen him square up with both hands on the weapon in front of him, I knew it was over. When he fired that round, at that close range, I just knew (Husfelt) was dead."

A gunfight, dramatically caught on tape, ensued. By the end, Duke lay on the ground, dead by his own hand. Jones emerged from where he fired at the Duke at the back of the room, and got quite a surprise.

Colleen Jones said of her husband, a retired police officer, "He's an awesome man. That's what I fell in love with. Everyone asks me why I put up with it. And I'm like, 'Well, how can you tell him "no?"' I mean, that's who he was when I met him and I just love him. I'm very proud of him. He has a huge heart."

Click on the video below for the full interview.