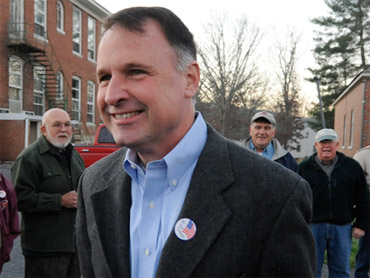 A student group at Roger Williams University is offering a new scholarship for which only white students are eligible, a move they say is designed to protest affirmative action.

The application for the $250 award requires an essay on "why you are proud of your white heritage" and a recent picture to "confirm whiteness."

"Evidence of bleaching will disqualify applicants," says the application, issued by the university's College Republicans.

Jason Mattera, 20, who is president of the College Republicans, said the group is parodying minority scholarships.

The stunt has angered some at the university, but the administration is staying out of the fray. The school's provost said it is a student group's initiative and is not endorsed by Roger Williams.

Mattera, who is of Puerto Rican descent, is himself a recipient of a $5,000 scholarship open only to a minority group.

"No matter what my ethnicity is, I'm making a statement that scholarships should be given out based on merit and need," Mattera told the Providence Journal.

His group took out a full-page ad in last week's issue of the university's student newspaper to tout the scholarship, which was for $50 until two donors came forward to add $100 each during the weekend, Mattera said.

It's not the first brush with controversy for the group. The school temporarily froze the Republicans' money in the fall during a fight over a series of articles published in its monthly newsletter. One article alleged that a gay-rights group indoctrinates students into homosexual sex.