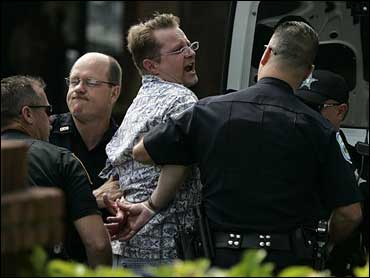 Under increased security and with fading hopes, Terri Schiavo's parents asked supporters to return home to spend Easter Sunday with their families as the couple's severely brain-damaged daughter went a ninth day without food or water.

Paul O'Donnell, a Roman Catholic Franciscan monk, said the family unsuccessfully urged Michael Schiavo to allow his wife the sacrament of communion during the holiest day of the Catholic year. She received last rites and communion before the feeding tube was pulled.

"This is in violation of her religious rights and freedoms and allows the governor to ... intervene," O'Donnell said Saturday, repeating the family's request that the governor take Schiavo into protective custody. "We beg you to have courage and take action."

Federal judges have repeatedly ruled that Schiavo's religious rights are not being violated, and Gov. Jeb Bush has said he could not ignore court orders.

Schiavo suffered brain damage in 1990 when her heart stopped briefly from a chemical imbalance believed to have been brought on by an eating disorder. She left no living will.

Schiavo's parents, Bob and Mary Schindler, have disputed that their daughter is in a persistent vegetative state as court-ordered doctors have determined. Her husband says she would not want to be kept alive artificially. The two sides have been locked in legal battles for years over the issue.

Police brought in extra officers to block the road in front of Schiavo's hospice, citing the increased hostility and intensity of protests. Thirty-five protesters have been arrested in the past week, many while trying to deliver water to the brain-damaged woman.

Late Saturday, the Florida Supreme Court dismissed a request from the parents' attorney to have their daughter's feeding tube reinserted, turning aside an emergency petition arguing that a Pinellas County judge ignored new evidence about her wishes and medical condition.

The Schindlers' attorneys decided not to file another motion with a federal appeals court, essentially ending their effort to persuade federal judges to intervene — something allowed by an extraordinary law passed by Congress.

At least two more appeals loomed by the state and the governor, but those challenges were before the state 2nd District Court of Appeal, which has rebuffed Bush's previous efforts in the case.

"The Schindlers have lost because the law is not on their side and the facts aren't on their side, and nothing that Congress can do or politicians can do or activists can do can change that dynamic," says CBS News Legal Analyst Andrew Cohen.

About 25 protesters held a nondenominational Easter sunrise service outside the hospice, despite the Schindlers urging them to celebrate the holiday with their families.

"Be with your children," O'Donnell told supporters Saturday evening. "Hold them close and cherish every moment you have with them."

Terri Schiavo was raised Roman Catholic, and her parents have made heavy use of her faith as the basis for the numerous appeals to reinsert the feeding tube.

Meanwhile, police monitored the scene from the hospice roof, patrol cars blocked each entrance and uniformed officers patrolled the grounds.

Schiavo's condition has deteriorated since her feeding tube was removed, but attorneys for each side offered distinctly different assessments.

David Gibbs III, who represents the Schindlers, said "Terri Schiavo will pass the point that she will be able to recover over this Easter weekend." Family supporters also said Terri's breathing has become increasingly labored. Another family attorney said hospice workers began giving her morphine.

But Michael Schiavo's attorney, George Felos, denied reports by the parents' attorneys that her tongue and eyes were bleeding, wracked by dehydration.

"She is resting comfortably," Felos said Saturday. "Her breathing does not appear to be shallow."

Doctors have said she would probably die within a week or two of her feeding tube being pulled, which was done last Friday.