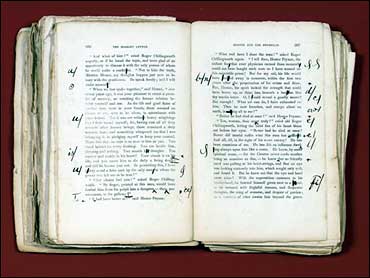 The pre-sale estimate was between $200,000 and $300,000 for 144 pages of a printed proof of the classic novel. The manuscript was purchased by an American book dealer who requested anonymity, Christie's New York spokeswoman Bendetta Roux said.

The manuscript, with some pages browned and fraying at the edges, has more than 700 corrections on its pages -- many believed to have been made by Hawthorne's own hand. Others were probably made by the publisher's proofreaders.

A Hawthorne relative donated the corrected page proofs in 1886 to the organization that later became known as the Natick (Mass.) Historical Society.

The manuscript spent the next 118 years in a drawer, until trustee Roger Casavant came across it while doing an inventory of the society's collections and identified it as the oldest existing copy of "The Scarlet Letter."

There was "tremendous interest" in the sale, Roux said.

The rare manuscript and the handwritten corrections provide "a glimpse into how it came into being, how the author was thinking," she said.

They also give an insight into Hawthorne himself.

"It shows how meticulous he was and how much attention he paid to detail, including punctuation," Roux said.

No other proof pages of any of Hawthorne's novels or stories are known to have survived, according to Chris Coover, senior specialist in rare books and manuscripts at Christie's.

Hawthorne's original manuscript, used as a printer's copy, is known to have been burned by the author after it was returned by the publisher. In a letter to the publisher long after the book's 1850 publication, Hawthorne told of the original copy's demise.

He later told the publisher's widow that "I put it up the chimney," according to Christie's.

Until the discovery of this copy, the sole text source for the novel was the first printing.

The Natick society's board voted unanimously to auction the Hawthorne proof "strictly because it's outside our field of collection" as an institution devoted to Natick's history, said Anne Schaller, who directs the society's museum.

"The Scarlet Letter" is a critical look at the puritan utopianism that was the underpinning of American social belief during the foundation of the country. The book tells the tale of Hester Prynne, a woman who is ostracized in Boston during the late 17th century and forced to wear a scarlet letter A on her chest for committing the sin of adultery.

Hawthorne, who was born in Salem, Mass., in 1804, also penned "The House of the Seven Gables" and "The Blithedale Romance."

The "Scarlet Letter" sale price includes Christie's commission of 19.5 percent of the first $100,000 and 12 percent of the rest. The auction house spokeswoman said she didn't know what the previous record was.