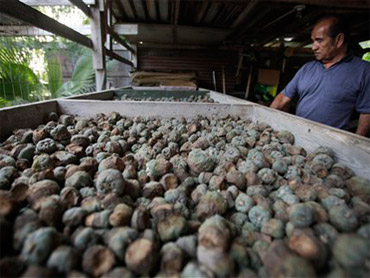 When the state of Texas licensed him as a peyote distributor in 1990, Mauro Morales put a sign in his front yard with his name and phone number: "Peyote Dealer. Buy or Sell Peyote."

His neighbors balked, saying calling so much attention to his trade had to be against the law. "So I called Austin and said, 'I think everything's legal. I've got the paperwork. Can't I put up a sign?"' Morales recalled.

Twenty years later, the sign still stands, but it's harder than ever for Morales to make a living. The hallucinogenic cactus is becoming more difficult to find because many ranchers have stopped allowing peyote harvesters on their land, preferring to plow the grayish-green plant under so cattle can graze. Others now lease their property to deer hunters or oil and gas companies.

The result is over-harvesting of remaining stocks, making peyote even more scarce. "Things are kind of getting slower every year," said Morales, who is just one of just three Americans currently licensed to sell peyote, which grows wild in four Texas counties along the border with Mexico.

Peyote is illegal under federal law, except for use in some American Indian religious ceremonies. Since the mid-1970s, the state has licensed a small number of people to sell it to members of the Native American Church.

California voters recently rejected a proposal to legalize marijuana for recreational use, and a drug war threatens to tear Mexico apart. But Morales says his business is simple and honest.

Morales, 67, has seven employees who search for peyote plants to harvest their "buttons," small round growths that contain the mind-altering juice mescaline, which produces a dreamlike delirium for up to 12 hours.

Users generally chew on the buttons, smoke them or boil them in water to make a drug-infused tea. The number of buttons it takes to feel psychedelic effects varies greatly by person and the potency of individual plants.

Morales' crews now bring in about 3,000 buttons per day, but even four years ago, it was 10,000. He began harvesting peyote at 14, when American Indian elders taught him to cut the buttons without harming the roots. Back then, each button could be sold to distributors for a nickel, but had to be at least as large as a half dollar.

Now Morales pays his harvesters 15 cents per button, no matter the size. "There are no more half dollar-sizes around," he said.

New peyote plants look a bit like oversized green molars. Even fully grown plants rarely get larger than an orange.

Known as "Peyoteros," the peyote distributors use information provided by families in the area to hunt the cactus down, and they know all roads and trails by heart.

Prime spots are usually hillsides that are a bit rocky and have no sand in the soil. The intense heat means harvesters can often search only until early afternoon and must contend with the occasional rattlesnake.

Mange said the number of licensed distributors in Texas has declined as the job has gotten harder. Experts have noticed the same changes.

"The cactus grows slowly, and the peyoteros are forced to go back too early and harvest re-growth buttons," said Martin Terry, a biology professor at Sul Ross State University in Alpine, Texas. He co-founded the Cactus Conservation Institute to safeguard several species, including peyote.

Harvesters once routinely uncovered 100- to 150-year-old plants but now usually settle for cacti that are less than five years old, said Johnson, who deals peyote in Mirando City, about 90 miles north of Rio Grande City, otherwise known for its thriving mesquite tree population.

Teodosio Herrera is spiritual leader of the 30-member Rio Grande Native American Church and calls peyote "the medicine," a monicker used by everyone who deals legally in the cactus. He said the problem of cutting away buttons too early is exacerbated by poachers who harvest peyote incorrectly, harming the roots so the plants cannot regenerate.

"If we don't do something to ensure survivability, it may not be around for my great-grandchildren," said Herrera, 62.

Commercial quantities of peyote grow nowhere in the U.S. outside Texas. Besides Morales and Johnson, the only other licensed peyote dealer is Morales' nephew, also in Rio Grande City. Ninety percent of peyote grows in Mexico, but it is generally not valuable enough to smuggle to the U.S. - Morales sells 100 buttons for $35.

He said there used to be poachers who hunted down their own peyote and sold it illegally on the roadside, but their ranks have also diminished along with the supply.

Morales has 300 to 500 clients per year. Buyers must be members of the Native American Church and at least one-quarter American Indian. They have to fill out paperwork providing tribal information.

The church traces its roots to the 1880s, around the time of the Wounded Knee massacre, when a new religion known as the "ghost dance" sprung up among American Indians. The church now has branches in more than 20 states and as many as 500,000 worshippers by some estimates.

Herrera, who has church members spread across South Texas, performs seven ceremonial gatherings a year with peyote. He leads more for special occasions such as weddings and funerals.

"In the '60s especially, hippies were experimenting with it," Herrera said. "To us, it's always been a spiritual medicine."

Slight and balding, Morales is extremely hard-of-hearing but chatty - switching seamlessly between English and Spanish. He shares his home with his wife and a Chihuahua that sleeps in a rusty bird cage.

Many of Morales' customers visit him to buy fresh peyote, which he breaks down with a tomato slicer and parcels out in gunny sacks. He will also mail dry buttons all over the U.S.

Many buyers stay on his property to use the peyote. In his backyard, where chickens totter about and mosquitoes feast on any exposed skin, Morales has a brick altar surrounded by a garden of peyote.

In an adjacent shed, he has wooden bins, each holding 1,000 peyote buttons in various states of aging. He generally keeps 20,000 total in stock.

Fresh peyote is fairly smooth. Older buttons become gnarled and even sprout exterior seedlings similar to the eyes on potatoes. Inside, the cactus is yellow and starts out looking moist but dries out over time. After about a month, the button becomes soft and full of bruises.

For years, Morales refrained from using peyote because doing so was against the law for him. But now he acknowledges sometimes taking it with his morning coffee.

He credits it with helping ease his heart disease. Once a day, he steps to his altar and crosses himself, offering a small prayer of thanks.

"It gets in your head after a while and feels pretty good," he said. "The plants were made by the creator. I think about that a lot."