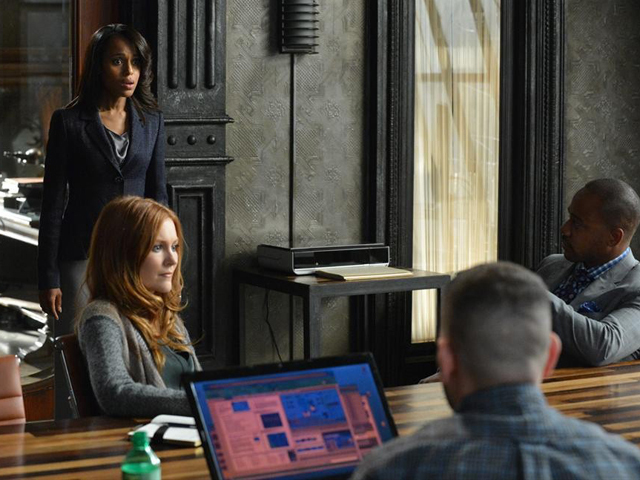 "Scandal" returned to TV on Thursday night, bringing its gladiators in suits and crazy-twisty storylines along for the ride.

Much of the episode, titled "It's Handled," focused on the fallout from what we saw at the end of last year's finale: Olivia Pope's name being leaked to the press as the president's mistress.

Olivia is riding away from the press swarmed in front of her home in a car with Rowan, now revealed to be her father. "Why did you try to have me killed?" she asks him. Turns out he was after Jake Ballard, not her. He then reads her the riot act for sleeping with the president, calling her a harlot who "opened her knees and gave it away to a man with too much power."

"Do you have to be so mediocre?" he spat, telling her she should have aimed higher than wanting to be Fitz's first lady.

Rowan brings her to an airplane hanger, where a private jet is waiting to take her somewhere where no one will know who she is or what she's done. While on the plane, she sneaks a call in to Cyrus, who convinces her she needs to stay and fight.

Olivia gets off the plane, and her father isn't pleased. "The White House will destroy you," he seethes. "That's what mom told me about you," she counters.

At the White House, the search is on to find out the source of the leak. Cyrus turns to his White House reporter husband and learns the reporter who broke the story regularly haunts a D.C. bar where Secret Service agents are known to hang out. First lady Mellie quizzes one agent, who swears he didn't blab Olivia's name.

To make matters worse, video surfaces of Fitz leaving Olivia's apartment building. Cyrus, who convinced Olivia to get off that plane and fix this mess, orders a "kill folder" be started on his friend, digging up information on her family and readying to paint her as sleeping her way to the top.

At Olivia Pope & Associates, Olivia finds she doesn't have any clients left in the wake of her own public scandal. Her dad shows up, refuses to tell her where Jake is and tells his daughter she's out of options. But, really, Olivia Pope is never out of options -- she dials a number, gives a secret code and next thing we know she's in a White House bunker for a sit-down with Fitz and Mellie, trying to formulate a plan.

Fitz pushes for them to tell the truth and Olivia, in fixer mode, admits there's a way it could work. But Mellie refuses to stand at her husband's side as he tells the public he's in love with another woman. So, they craft a story that plays down the affair -- her husband cheated twice, once on Inauguration Night and again after he was shot. It's an unbearably uncomfortable scene, and by the time Mellie leaves Olivia is struggling to keep her composure. Fitz asks if she's OK, she says she's fine so many times you know she's really not. He embraces her, and she lets herself cry.

It looks like they're all in agreement when the leave the bunker, but Mellie has something else up her sleeve and goes to Cyrus with a plan of her own.

Back at Olivia's office, her staff is trying to "handle" her. Harrison rallies the troops with the best line of the night -- "Are we gladiators or are we bitches?" -- and hands off a mysterious DVD to Cyrus. What's on it? Footage of White House communications aide Jeannine Locke, drunkenly slurring that she thinks the president is "super doable." Suddenly, the press has someone new to go after and the heat is off Olivia.

This, of course, derails the Fitz-Mellie-Olivia plan to come "clean," and the woman who wears the white hat was none too pleased. "What did you do?" she asks her team, incredulously. Fitz still wants to go through with his and Mellie's planned press conference, but the first lady drops a bomb and says she knows it was him who arranged for Olivia's name to be leaked to the press (via a Secret Service agent at that bar).

He admits he did it, but says it was only so Mellie wouldn't have Olivia's name in her arsenal anymore. "Now she's free," he tells his wife.

But it's not over yet -- before the episode ends, two more things are revealed. First, Jeannine is the newest client of Olivia Pope & Associates. Second, Cyrus is taken at gunpoint to a secret meeting with Rowan, who hands him a folder with information about a classified mission Fitz and Jake flew in Iran back in their military days. "Oh my God," Cyrus says, shocked by whatever it is he's seen.

Tell us: What did you think of the season premiere of "Scandal"?