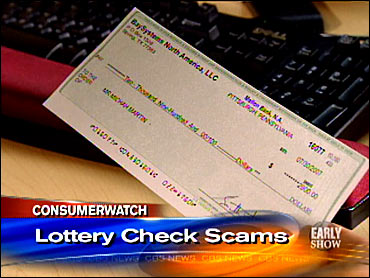 If you get a letter saying you've won the lottery, odds are you'll win nothing but trouble if you play along.

The Early Show consumer correspondent Susan Koeppen reports that, in a widely used scam attempt, consumers receive a real-looking check with the letters. All the recipients need do, the mail says, is deposit the check and use it to pay for taxes and fees on the overall winnings.

But, Koeppen explains, once you wire the money, the crooks take it and leave you with nothing.

When her producer's husband got such a letter out of the blue, the producer and Koeppen got suspicious, but asked him to play along, to show you how easy it is to be deceived.

He was skeptical, until he saw the check that came with it.

"When I actually looked at the check itself, I thought, 'Maybe this is real,' " Martin says.

The $2,900 dollar check was supposedly an advance on his winnings, and looked legit.

"There was water marking, a lot of security marking on it, there was a lot of detail on the check itself, and even the bank logo sounded familiar," Martin says.

The letter said the check would cover Martin's $2,500 "tax and clearance fee."

Over the phone, "Carol," Martin's "lottery agent," said he had 24 hours to deposit it, then wire back the money.

"It's very legitimate, so none of your personal information comes directly to us, and you don't pay anything directly out of your pocket," Carol told Martin.

But authorities say such real-looking checks are actually faked, and part of a sophisticated scam that targets thousands of Americans every year.

Eileen Harrington of the Federal Trade Commission put it simply: "These people are crooks. They're just trying to steal your money."

She says, once you deposit these checks, it can take the bank weeks to figure out they're counterfeit.

"In the meantime," Harrington continues, "if the consumer has sent money before the check clears, they're out of luck."

She also got a letter saying she'd won the lottery, and all she had to do was deposit (a $4,500) check, wire back the money, and claim her winnings.

She deposited the check, only to learn it was counterfeit.

Now, she has to pay back her bank the thousands of dollars she wired.

The FTC's Harrington says there's little hope of ever finding the money that she lost: "Crooks like to spend the money as quickly as they receive it, so we can catch up with the crooks, but we probably can't catch up with the money. Once the money is gone from the consumer's bank account, it's gone."

Martin's check was bogus, as well.

So, Koeppen called "Carol" to confront her.

"I'm just calling to find out why counterfeit checks are being sent out," Koeppen said.

"I'm totally not interested in speaking with you if you're not calling concerning our business," Carol replied.

"We're calling," Koeppen responded, "about the checks that you're sending out."

"So?" Carol retorted. "Mind your own business."

"Are you denying that these are counterfeit checks that you are sending out?" Koeppen asked.

Then, Carol hung up.

Martin admits the allure of getting something for nothing was hard to resist: "There was still a part of me that wants to believe it was real. Even looking at the check today, I still want to believe it's a real check."

Koeppen called the company on the check, which said it has actually been stolen, used to make fakes, and it's received complaints from all over the country.

What should consumers do when they get one of these lottery letters and checks?

Says Koeppen: "Shred it immediately, and contact the FTC to file a complaint (at its Web site or by calling its complaint hotline, 1 (877) FTC HELP). The FTC wants to hear about these lottery scams so it can try to track the crooks down and prosecute them.

How much does Nixon have to pay back?

Says Koeppen: "She still owes a couple of thousand dollars. She pays back about $200 a month to her bank."

People need to remember: When you deposit a check, it can take weeks for your bank to determine if it's fake. So, if you wire the money before then, you're responsible for the funds. And, once you wire the money, it's nearly impossible to recover it.

From the Federal Trade Commission:

A new scam is swindling consumers: counterfeit checks that seem legitimate to both bank employees and consumers, but that leave unsuspecting consumers footing the bill. The Federal Trade Commission is issuing a new brochure, Giving the Bounce to Counterfeit Check Scams, which explains common angles used in these scams, the responsibilities of banks and consumers when it comes to counterfeit checks, and advice on how to avoid these increasingly common traps.

The FTC advises consumers not to rely on funds from checks unless they know and trust the person who gave them the check or, better yet, until the bank confirms that the check has cleared. Other advice includes:

Throw away any offer that asks you to pay for a prize or a gift. If it's free or a gift, you shouldn't have to pay for it. Free is free.

Know who you're dealing with, and never wire money to strangers.

If you accept payment by check, ask for a check drawn on a local bank, or a bank with a local branch. That way, you can make a personal visit to make sure the check is valid. If that's not possible, call the bank where the check was purchased, and ask if it is valid. Get the bank's phone number from directory assistance or an Internet site that you know and trust, not from the check or from the person who gave you the check.

If the buyer insists that you wire back funds, end the transaction immediately. Legitimate buyers don't pressure you to send money by wire transfer services. In addition, you have little recourse if there's a problem with a wire transaction.

Resist any pressure to "act now." If the buyer's offer is good now, it should be good after the check clears.

Under federal law, banks must make funds available to you from U.S. Treasury checks, official bank checks (cashier's checks, certified checks, and teller's checks), and checks paid by government agencies at the opening of business the day after you deposit the check. For other checks, banks must similarly make the first $100 available the day after you deposit the check. Remaining funds must be made available on the second day after the deposit if payable by a local bank, and within five days if drawn on distant banks.

However, just because funds are available on a check you've deposited doesn't mean the check is good. It's best not to rely on money from any type of check (cashier, business or personal check, or money order) unless you know and trust the person you're dealing with or, better yet — until the bank confirms that the check has cleared. Forgeries can take weeks to be discovered and untangled. The bottom line is that until the bank confirms that the funds from the check have been deposited into your account, you are responsible for any funds you withdraw against that check.