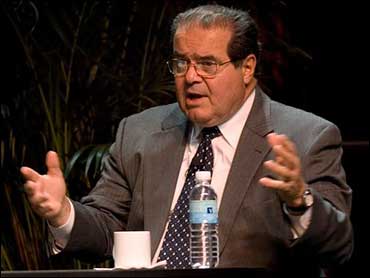 Supreme Court Justice Antonin Scalia's famous temper is often discussed in legal circles as an indelible part of his forceful personality, as if it were a mole on his cheek or the accent that rolls off his tongue. Whenever he acts like a jerk, and that is a relatively common occurrence for a man who works within the semi-secret world of the High Court, we are told by his sycophants that he doesn't suffer fools gladly and that he has earned the right to be rude.

We are supposed to accept these excuses and explanations, shrug our shoulders, and hear his tribunes declare: well, cut the guy some slack, you know how moody geniuses are! Whatever you think about Scalia's jurisprudence, his bully routine is getting old. Tuesday afternoon, Scalia showed again just how easy it is to set him off when a college student asked him a reasonable, even poignant question about accessibility to the workings of the Supreme Court. Here is how the Fort Lauderdale Sun Sentinel chronicled the incident:

Student Sarah Jeck stood in front of 750 people and asked Scalia why cameras are not allowed in the U.S. Supreme Court even though the court hearings are open, transcripts are available and the court's justices are open enough to go 'out on book tours.' 'Read the next question,' Scalia replied. 'That's a nasty, impolite question.'

Perhaps you can find the part of Jeck's question that is "nasty" and "impolite." I can't. Indeed, the only person who was nasty and impolite was Scalia, who no doubt was feeling defensive because his appearance in South Florida was, in fact, tied to a book tour. Turns out that Justice Nasty is hawking a book called "Making Your Case" that he co-authored with a fellow named Bryan Garner. These unseemly book tours, and the publicity and marketing that comes with them, are part of the new normal at the Court. Justice Clarence Thomas, for example, won't ask a single question from the bench. But he's Chatty Kathy when he's hawking his memoirs.

Scalia wants the publicity, he wants your money, you pay his salary, he's a public servant, but don't you dare ask him any pertinent questions. As Tony Mauro reported in the Legal Times blog, Jeck said later of Scalia: "He can dish it out, but he can't take it, I guess… I'm generally a very polite person. I'm really surprised the way it turned out. It was not a preposterous question." No, Sarah, it wasn't. It was a perfectly legitimate question. And Scalia probably realized his mistake shortly after he made it because he then tried to answer Jeck's question.

Later, however, Scalia addressed Jeck's question, saying he originally favored televising Supreme Court proceedings when President Reagan appointed him in 1986. But he said he has come to believe that "most people will only see 30-second takeouts" that would not give a true impression of the court. Why should I be a party to the miseducation of the American people?" Scalia said.

Why, indeed. It's bad enough that the Justice first hid behind his black robe when Jeck asked his question. But when he finally did answer it he displayed the sort of cynical view of America, and Americans, and the American media that is completely out of touch with reality. Scalia sounds like he's living in a pre-Internet world of the 1986, when he ascended to the Supreme Court as one of Ronald Reagan's most enduring legacies. In other words, on both form and substance, the Justice simply blew it.

The fact is that there is tremendous popular interest in seeing significant portions of the Supreme Court arguments live or on tape. It's incontrovertible, for example, that the release of audio-taped oral arguments from the Court, which started only a few years ago, has not caused the sky to fall at the Court (or anywhere else). Indeed, the audio recordings have been played at great length and have helped Americans better comprehend the law and the brilliance of the men and women who practice it on that level.

Another argument often posited by anti-camera zealots is that somehow the essence of what the Court does will change when the klieg lights are turned on. But there are federal appeals courts which allow cameras in oral argument and those courts haven't been transformed into a Marx Brothers set. And surely Justice Scalia and others don't believe that they will change their style at oral argument just because the red-light turns on, do they?

I want my Supreme Court Justices to be polite, even humble, even though we all know they are smarter than the rest of us. I want to see learned men and women in the law treating students with respect and courtesy. And I want a frank discussion about cameras in courtrooms instead of knee-jerk reactions. Is that too much to ask? And, please, I don't want to have to read the book to find out.