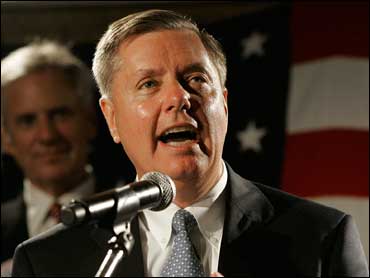 Engineer Bob Conley was nearly 1,000 votes ahead of attorney Michael Cone in the Democratic primary for the chance to run against Graham.

A recount, required because the margin of victory was so small, could begin as early as Friday but will likely take place Monday, said South Carolina Election Commission spokesman Chris Whitmire.

Graham, a one-term incumbent, cruised to an easy victory Tuesday over primary opponent Buddy Witherspoon, who slammed him for his work with John McCain on failed immigration reform.

Meanwhile, the stage was set for an expensive and closely watched Senate race in Maine as Democrat Tom Allen brushed aside his primary challenger and moved on to the November race against incumbent Sen. Susan Collins. She was unopposed in the Republican primary.

And in Virginia, a county official beat a former congresswoman in the bitter Democratic contest for the seat being vacated by retiring Republican U.S. Rep. Tom Davis.

In South Carolina, Graham won with about 67 percent of the vote compared with 33 percent for Witherspoon, a retired orthodontist and former Republican National Committee member who accused him of being too liberal.

Graham's immigration measure, which would have provided a path to citizenship, drew derision last year at the state GOP convention, and Cone and Conley both called the plan amnesty for illegal immigrants.

But Graham, an Air Force Reserve colonel who has served in Iraq, had name recognition and a huge financial advantage. McCain won the January primary in South Carolina and Graham used his endorsement in television ads.

Farther north, Democrats vied for the chance to pick up a seat in Virginia's 11th Congressional District, where Republican moderate Davis is retiring after nearly 14 years. He represents suburbs in and around the Capital Beltway, including much of Fairfax County, the wealthiest in the nation.

Gerry Connolly, chairman of the Fairfax County Board of Supervisors, won the four-way primary with about 56 percent of the vote. His nearest competitor was former Rep. Leslie Byrne, who held the seat for one term before losing it to Davis in the Republicans' 1994 takeover of Congress. She got about 34 percent of the vote.

In November, Connolly will face Republican Keith Fimian, a businessman making his first run for office.

Southern Maine's 1st District, where Allen is giving up his seat, featured a hotly contested six-way Democratic race and a two-way Republican contest.

Chellie Pingree, a former Senate majority leader, won the Democratic primary while Charlie Summers, a former state senator who recently returned from duty with the Navy in Iraq, won the Republican race.

And in Georgia, a political consultant defeated a national guardsman just back from a tour in Iraq in a runoff election to replace state Rep. Ron Sailor, who is facing prison time for money laundering. Dee Dawkins-Haigler had 54 percent of the vote, beating Malik Douglas.