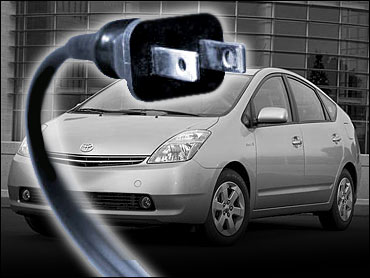 
What if you never had to fill up with gasoline again? No, really. Never ever.

Wouldn't it be great to have a car that runs only on batteries? No internal combustion engine. No hybrid. A car so convenient that all you have to do is plug it in when the battery needs to be recharged.

Toyota, the maker of the popular Prius hybrid, announced just such a car over the weekend at the Detroit auto show. Toyota promises to have the car available by 2010.

General Motors is working on the Volt. Similar idea - all batteries and perfect for a roundtrip commute of less than forty miles.

GM is also planning to roll out a plug-in hybrid Saturn model in two years.

The competition to develop the best, longest lasting and environmentally friendly batteries is yielding important dividends - cleaner air and less dependence on foreign oil which will translate into cheaper gas.

The car industry is beginning to understand that the greening of the planet can also mean profits.