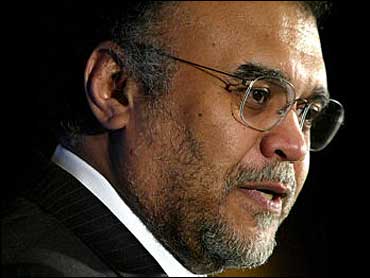 The Saudi ambassador to the United States on Wednesday denied any linkage between the U.S. presidential election campaign and a Saudi pledge to the Bush administration to push for lower oil prices.

There was no "quid pro quo," Prince Bandar bin Sultan told reporters after a meeting with national security adviser Condoleezza Rice about the latest terrorist strike in Saudi Arabia.

"The president has asked a few times that we should be helping to make sure that oil prices don't go too high that would curb the world economy recovery," Bandar added.

"I cannot say we're not aware that you are going through your seasonal tribal warfare now so it's very dangerous to open one's mouth here on any issue," said Bandar. "I hope Senator (John) Kerry has heard my explanation about the oil and he can be assured that we didn't make any deals that could interfere in our friends' internal affairs."

Bandar said the Saudi efforts are "not for the benefit of the president's political needs. I think reasonable prices particularly lower oil prices between $22 and $28 is good for the American people, for the American economy, for the world economy and of course for the Saudi economy."

CBS' "60 Minutes" reported Sunday that Washington Post journalist Bob Woodward said Bandar promised Bush that Saudi Arabia will lower oil prices in the months before the election to help ensure the U.S. economy is strong on Election Day. Subsequently, Woodward said that the Saudis had hoped to keep oil prices low during the period before the election because of its impact on the economy.

[CBS News and Simon & Schuster, the publisher of Woodward's book "Plan of Attack", are both owned by Viacom.]

On Monday, Saudi Arabia denied accusations that it has an agreement with the White House to increase oil production closer to the Nov. 2 election, thus driving down gasoline prices.

"The allegation that the kingdom is manipulating the price of oil for political purposes or to affect elections is erroneous and has no basis in fact," said a statement issued in Riyadh by top Saudi foreign policy adviser Adel al-Jubeir.

"If it is true that gas supplies and prices in America are tied to the American election, tied to a secret White House deal, that is outrageous and unacceptable to the American people," Kerry said.

On Wednesday, Bandar said, "On the oil situation, I really don't see what is the big deal there, unless somebody would like to see the oil crisis stay high."

Demonstrating his close ties with the Bush administration, Bandar went to the White House to talk about the terrorist attack in which a suicide attacker bombed a security police building in the Saudi capital of Riyadh. On his way out, Bandar talked about the issue that has stirred controversy: oil prices and the presidential election.

"The two subjects were not discussed at the same time," said Bandar. Pressed further about whether there was any linkage, Bandar said, "Not so in my mind."

On another controversy centering around whether Bandar was told before Secretary of State Colin Powell about plans to invade Iraq, Bandar said he met on that subject Jan. 11 with Vice President Dick Cheney, Defense Secretary Donald H. Rumsfeld and Joint Chiefs of Staff Gen. Richard Myers. Powell has insisted that he was kept fully abreast of all war planning.

"The vice president told me that the president has not made a decision yet," said Bandar. He said he was told by Cheney, "However, here is the plan if everything else fails." He noted Saudi Arabia is a neighbor to Iraq and so it was appropriate for the Americans to brief him.

Bandar said he learned the war started in March and "to be very honest with you ... I didn't know about the war actually except for an hour before that time when I was informed by the White House."