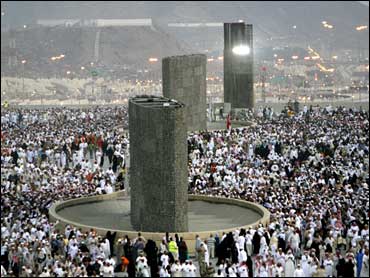 "Security forces have foiled a plot to carry out a terror attack on holy sites outside Mecca with the aim of confounding security forces," Interior Ministry spokesman Mansour al-Turki told The Associated Press.

Nearly 3 million pilgrims came to Saudi Arabia for the annual hajj that wound up Friday with a final visit to Mecca after days of performing rituals in the surrounding hills.

"The group was arrested three days before the hajj season," he added, meaning that the men were taken into custody approximately a week earlier.

Al-Turki gave no further details on the number or identity of those arrested, but Saudi-owned satellite television station Al-Arabiya described them as Saudis.

Three weeks before the hajj began, the Saudi government announced a massive security sweep that netted 208 suspects in six different cells who had allegedly plotted to carry out attacks against the kingdom's oil infrastructure.

At the time, a Saudi security official, speaking on condition of anonymity because he was not authorized to talk to the media, said the large sweep was intended to send a warning to those looking to disturb the hajj and "damage the image of a forgiving Islam."

The official said the arrests included the capture of 18 suspects led by a Yemeni missile expert who allegedly planned to smuggle eight missiles into the kingdom to carry out terrorist operations.

The largest previous sweep by Saudi authorities was announced in April. It netted 172 militants, including pilots allegedly trained to carry out attacks on oil refineries using civilian planes.

The kingdom, which is the birthplace of al Qaeda leader Osama bin Laden, has been waging a heavy crackdown on the group's militants since a 2003 wave of attacks on foreigners here.

The recent arrests indicate that al Qaeda and other Islamic extremists are still actively attempting to destabilize the monarchy, which holds a quarter of the world's proven oil reserves.