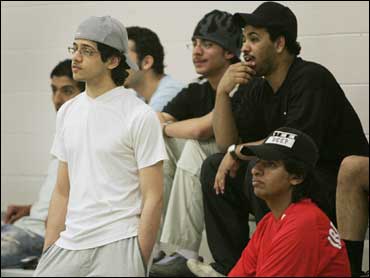 Thousands of students from Saudi Arabia are enrolling on college campuses across the United States this semester under a new educational exchange program brokered by President Bush and Saudi King Abdullah.

The program will quintuple the number of Saudi students and scholars here by the academic year's end. And big, public universities from Florida to the Kansas plains are in a fierce competition for their tuition dollars.

The kingdom's royal family — which is paying full scholarships for most of the 15,000 students — says the program will help stem unrest at home by schooling the country's brightest in the American tradition. The U.S. State Department sees the exchange as a way to build ties with future Saudi leaders and young scholars at a time of unsteady relations with the Muslim world.

Administrators at Kansas State University, an agricultural school surrounded by miles of prairie grass, say the scholarships are a bonanza for public education.

"The Saudi scholarship program has definitely heightened our interest in that part of the world," said Kenneth Holland, associate provost for international programs. "Not only are the students fully funded, but they're also paying out-of-state tuition."

Kansas State has boosted efforts to court Saudi officials in the last year, flying administrators and department heads to the Saudi embassy in Washington. It's paid off: last month about 150 Saudi students started classes there, each funded to the tune of about $31,000.

Saudi Embassy spokesman Nail Al-Jubeir said 90 percent of the 10,229 Saudi students the U.S. State Department has registered for the fall semester will also get such scholarships.

By January, U.S. government officials say the program will expand to 15,000 students, which means Saudi Arabia will send more foreign students to the U.S. than Mexico or Turkey. As funding for the scholarship program expands, those numbers are likely to grow.

College administrators say common misperceptions about the oil-rich nation make it crucial to create a tolerant environment for Arab and Muslim students, who have been singled out for scrutiny since the Sept. 11 attacks five years ago.

"We really want to make this special. We're going to truck in halal food from Kansas City," Holland said. "The Saudi government is trying to place the students in a variety of institutions across the country, but where you get the competitive advantage is how you treat the students when they get here."

Marwan Al-Kadi, who was active in the Muslim student association while he studied industrial engineering at Kansas State, said efforts to raise awareness about religious diversity have helped the new influx of students feel comfortable.

"Sometimes people ask me if I ride a camel to campus. They don't even realize how many cities we have in Saudi Arabia," said Al-Kadi, lounging in a cafe near campus, as his cell phone rang intermittently. "I want to use the education to go back and work for my father's company."

Elite Saudi families traditionally sent their children to schools in the United States, but their numbers fell sharply after Congress restricted visas following the discovery that 15 of the 19 hijackers on Sept. 11 were Saudi, said Rachel Bronson, an adjunct senior fellow for Middle East Studies at the Council on Foreign Relations.

Mohammed Al-Muzel, who grew up in the eastern Saudi city of Saihat and is joining Oregon State University's freshman class, is just the kind of student the scholarship program seeks to recruit.

His uncle studied in Portland in the 1980s, when Saudi-U.S. educational cooperation was at its peak. Almost three decades later, Al-Muzel will get his bachelor's degree in business an hour away, in Corvallis, Ore. Officials from both countries say multigenerational ties make it easier for them to navigate diplomatic conflicts, since leaders share a common educational background.

But some officials say efforts to fast-track educational diplomacy with Saudi Arabia could use additional scrutiny. Clark Kent Ervin, a former inspector general of the Department of Homeland Security, says the U.S. government has yet to ensure proper safeguards are in place to do effective background checks on all applicants.

Yet for Allan Goodman, president and CEO of the Institute of International Education in New York, the new bilateral agreement is a "tremendously positive" step toward person-to-person diplomacy.

"These 15,000 students will really jump-start education and that will be a great addition to the Kingdom," said Goodman. "At its base, it's about mutual understanding."