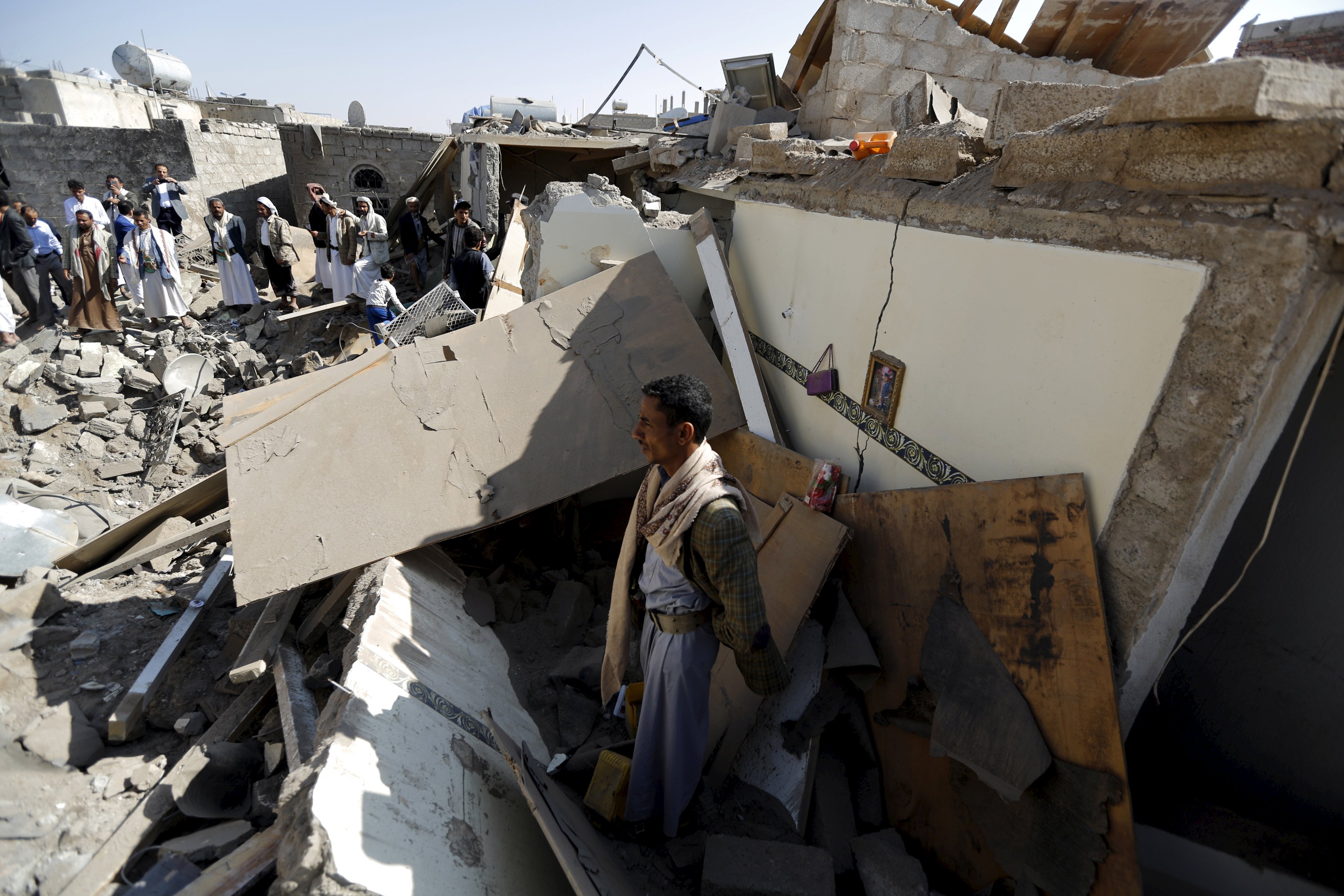 SANAA, Yemen -- Yemeni civilians shuddered in fear and bristled with anger under an intense Saudi-led bombing campaign against Shiite rebels on Tuesday, day six of fighting that prompted international aid organizations to express alarm over high civilian casualties from the strikes and violence roiling the country.

Residents of the capital, Sanaa, sought shelter and got little sleep during the night, while some took to the rooftops in anger or frustration, firing automatic rifles skywards toward the roar of warplanes. Schools, universities and government offices were all closed, along with most shops. Few cars ventured onto the mostly deserted streets.

"We haven't slept - one child screams and a second cries," said Mustafa al-Ahmadi, a father of eight who said the family seeks shelter in their basement when close explosions rock the house. "Once it's quiet, we return to our room but the minute we step in, a second explosion rocks the house so we return to the basement. This is how we spend the night, running back and forth."

In what was likely the worst night yet for Sanaa, aircraft late Monday and early Tuesday repeatedly bombed a weapons depot in the southern Faj Atten neighborhood, sending an eruption of fire into the air and shaking windows for kilometers (miles) around.

Officials from all sides said strikes hit the city's so-called "security belt" of army camps surrounding the capital, some of which stored ballistic missiles. Those camps are held by Shiite rebels, known as Houthis, or their allies, military units loyal to former President Ali Abdullah Saleh.

"We ran to the shop to take shelter after 1 a.m. because of airstrikes on the mountain," said Abdel-Rahman al-Hamidi, who lives near a rebel camp that was returning fire at warplanes. Many other shops are locked up with heavy metal chains.

The campaign by the Saudi-led coalition, made up mainly of Sunni Arab states, aims to weaken the Iranian-allied Houthis, who have overrun much of the country with the help of Saleh's loyalists and forced Yemen's current president, Abed Rabbo Mansour Hadi, to flee abroad.

The U.N. human rights office in Geneva said that in the past five days, at least 93 civilians have been killed and 364 wounded in five Yemeni cities engulfed in the violence, including, Sanaa. The overall figures are likely much higher and it was not immediately clear if the casualties cited by Geneva referred to just airstrikes or the strikes and fighting between Yemen's warring factions. The Saudi-led coalition says rebels have set up positions near civilians but that it is doing its best to avoid civilian casualties.

Overnight and into early hours Tuesday, the coalition also struck in and around the cities of Taiz, Ibb, Shabwa and Dahle and Aden, according to Yemeni military and security officials who spoke on condition of anonymity because they were not authorized to talk to the media.

The southern port city of Aden, a stronghold of Hadi supporters, has shaken for days by coalition strikes and by fighting between Hadi loyalists and Houthi-Saleh forces holding several positions in the city.

One resident, Ahmed Mohsen, told of a deadly blast he saw Monday, apparently from an errant shell in the fighting. "Several residents were sitting on the pavement outside, then suddenly we heard explosions and six people were killed," he said, adding that two others died of their wounds later.

Along with warplanes, warships and naval artillery were striking Houthi and pro-Saleh forces marching on Aden, trying to prevent them from reaching the city. Hadi had declared Aden the temporary capital of his government after he was forced to flee Houthi-controlled Sanaa. Last week, Hadi left the country for a summit in Egypt as fighting in Aden heated up.

Meanwhile, Iran said it sent an aid shipment to Yemen, according to the official IRNA news agency - Tehran's first such delivery since the airstrikes started. The aid contained 19 tons of medicines and medical equipment and two tons of food provided by the Iranian Red Crescent, IRNA said.

The agency reported that the aid was delivered by air early Tuesday but did not say where the cargo landed. The coalition has bombed a number of rebel-held airports and says it fully controls Yemen's airspace.

The conflict in Yemen marks a major escalation in the regional struggle for influence between Saudi Arabia and Iran, which also back rival sides in Syria's civil war. Critics of the Houthis charge that they are an Iranian proxy. Iran has provided aid to the rebels, but both Tehran and the Houthis deny it has armed them.

"We are not warmongers, but if the drums of war call for it, we are prepared," al-Faisal said in a speech to the consultative Shura Council. "The Houthi militias and the former president (Saleh), with Iranian support, insist on messing in Yemen."

Tuesday's statement from Geneva said U.N. human rights staffers in Yemen verified that at least 19 civilians died when airstrikes hit a camp for displaced people near the Houthi stronghold of Saada in northern Yemen, with at least 35 wounded, including 11 children.

The U.N. human rights chief Zeid Ra'ad Al Hussein on Tuesday said he was shocked by Monday's airstrike at the camp for displaced people and called on all sides to protect civilians from harm.

"The situation in Yemen is extremely alarming, with dozens of civilians killed over the past four days," Al Hussein said. "The country seems to be on the verge of total collapse."

The International Committee of the Red Cross on Tuesday called for the urgent removal of obstacles to the delivery of vital medical supplies needed to treat casualties.

Leaders meeting in Egypt for a two-day Arab League summit unveiled plans Sunday to form a joint Arab military intervention force -- setting the stage for an escalation in the conflict between U.S.-allied Arab states and Iran over influence in the region. Critics of the Houthis charge that they are an Iranian proxy. Iran has provided aid to the Houthis, but both Tehran and the rebels deny it has armed them.