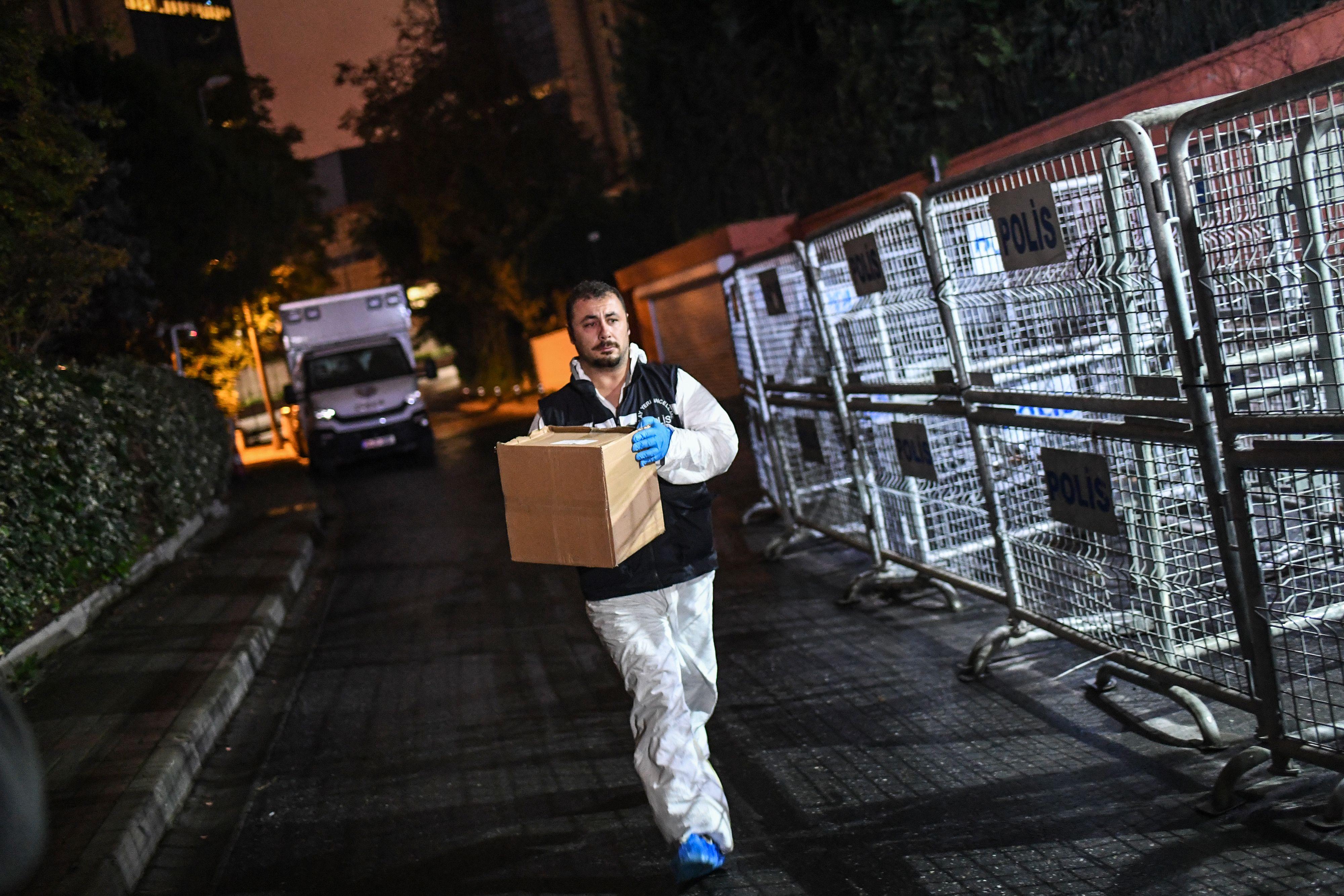 Turkey's justice minister said Thursday his government's investigation into the disappearance and alleged murder of journalist Jamal Khashoggi will wrap up soon, as police reportedly expanded their hunt for clues to new areas outside of Istanbul. Turkish and Arab media outlets said Thursday that officers were to search a forested area and a farmhouse just outside the city, after security camera video purportedly showed vehicles connected to Saudi officials visiting the sites on the day Khashoggi disappeared.

On Wednesday, Turkish forensic investigators searched the Saudi Consul General's residence in Istanbul.  Turkish officials have said they believe Khashoggi was killed by a Saudi government hit squad after he walked into the consulate 16 days ago.

As CBS News correspondent Holly Williams reports, unverified reports have also suggested that Khanshoggi's body may have been disposed of at the consul general's home. Saudi Consul General Mohammed al-Otaibi, the kingdom's top diplomat in Turkey, left the country and returned to Saudi Arabia on Tuesday.

Several of the Saudi suspects identified by Turkish officials reportedly have direct links to the 33-year-old crown prince, with whom the Trump administration has built close ties. According to Secretary of State Mike Pompeo and President Trump, senior Saudi officials -- including King Salman and his son the crown prince -- flatly deny any knowledge of Khashoggi's fate.

Pompeo returned to Washington on Wednesday after visiting Riyadh, where he met the senior Saudi royals behind closed doors, and then Turkey.

"They made a commitment to hold anyone connected to any wrongdoing that may be found accountable for that, whether they are a senior officer or official," Pompeo said of the Saudi ruling family. But he admitted that he had learned very little about the actual case of the missing journalist from his meetings in Riyadh.

"I don't want to talk about any of the facts," Pompeo told journalists. "They didn't want to either, and they want to have the opportunity to complete this investigation in a thorough way."

The top U.S. diplomat said he felt it was "a reasonable thing to do to give them that opportunity and then we'll all get to judge. We'll all get to evaluate that work that they do."

But on Wednesday, one State Department official bluntly told CBS News that "Saudi Arabia lied" and now "feels cornered" over the journalist's disappearance.

Turkish pro-government newspaper Sabah published pictures on Thursday showing a man identified as Col. Maher Abdulaziz Mutreb, a member of the crown prince's personal security team, whom the paper alleges was in charge of the operation in Istanbul.

Photos appear to show Mutreb accompanying the crown prince on a trip to the U.S. earlier this year, and he was formally registered as a diplomat in London.

One picture shows the colonel walking into the Saudi consulate in Istanbul at 9.55 a.m. on Oct 2. Khashoggi arrived at 1:14 p.m. Another photo shows Mutreb at the Saudi Consul's residence at 4:53 p.m., and then at 5:15 p.m., he is seen with his team checking out of the Movenpick hotel in Istanbul, where they checked in shortly after arriving in Turkey at 3:28 a.m. on the same day.

According to Sabah, Mutreb and his team had a 5-night reservation at the hotel, but they left later on the same day. At 5:58 p.m., security cameras showed him and his team back at Ataturk airport. The private jet, reportedly rented in Mutreb's name, took off at 6:20 p.m. for Dubai.

Other reports, which CBS News cannot verify, include grizzly new details about the audio recording that Turkish officials claim to have from inside the consulate building -- including allegations that Khashoggi's body was dismembered while he was still alive.

On Wednesday, President Trump said he had asked Turkey to turn over the purported audio recording.

"I am not sure yet that it exists," Mr. Trump told reporters, adding that it, "probably does, possibly does."

It remains unclear whether U.S. intelligence officials have seen or heard any recordings at all from inside the Saudi consulate in Istanbul on Oct. 2.

Mr. Trump has continued to praise Saudi Arabia as an important ally, and refused to say whether he has sent FBI agents to help investigate what happened to Khashoggi, asking reporters rhetorically on Wednesday, "Why would I tell you?"

Mr. Trump pushed back against critics who say he's letting Saudi Arabia get away with murder in the name of preserving the massive economic relationship between the country; the ultra-conservative Islamic kingdom is the biggest purchaser of U.S. military hardware, and while some major American businesses have begun distancing themselves from the Saudis, the royal family remains a massive investor in the U.S.

"I am not giving cover at all," Mr. Trump said on Wednesday. "They're an important ally, but I want to find out what happened, where is the fault."