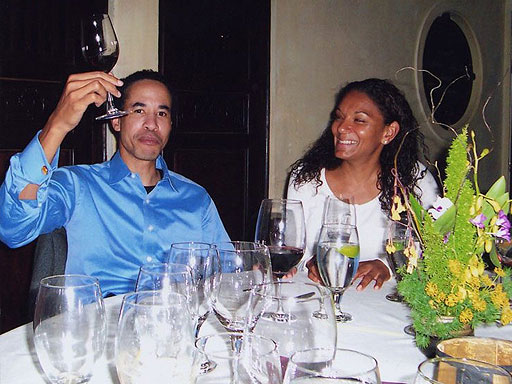 Convoys of police vehicles headed into a mountainous area northeast of Riyadh Tuesday to join a hunt for terror suspects, possibly including the chief of al Qaeda's Saudi network.

Meanwhile, Saudi Foreign Minister Saud al-Faisal says U.S. criticism of the kingdom is undermining efforts to fight terrorism and that America was partially to blame for the rise of Osama bin Laden.

Al-Faisal said al Qaeda's attack on America on Sept. 11, 2001, was part of its plan to eventually replace the Saudi kingdom with an Islamic theocracy.

"People who attack Saudi Arabia are unwittingly serving al Qaeda," he said at an event Monday sponsored by the U.S.-Saudi Arabian Business Council and the Foreign Policy Association.

To take over Saudi Arabia, al Qaeda "had first to drive a wedge between Saudi Arabia and the United States," al-Faisal said. "And what better tool to utilize than the spectacular criminal act of 9/11?"

Some U.S. lawmakers have criticized the Saudis for not having done enough to crack down on terrorism and terrorism financing.

Since attacks in Riyadh in May killed 23 victims and 12 terrorists, Saudi Arabia has conducted a crackdown on militant groups. Tuesday's hunt was the latest operation.

Abdulaziz Issa Abdul-Mohsin al-Moqrin, the kingdom's most wanted militant, is believed holed up with four to five other terror suspects near al-Hassayah, 30 miles northeast of Riyadh.

Police armed with automatic weapons stopped traffic at a checkpoint near al-Hassayah, and a helicopter flew overhead as police vehicles streamed past palm groves to the area.

A security official told The Associated Press that counterterrorism officers have surrounded the area since late Sunday.

U.S. and Saudi officials believe al-Moqrin is al Qaeda's top figure in Saudi Arabia and the mastermind of a Nov. 8 bombing at a Riyadh housing compound that killed 17 people, most of them Muslims working in Saudi Arabia.

On Wednesday, the suicide bombing of a government security building in Riyadh killed five people and wounded 148 others.

On Friday, Saudi forces fought a gunbattle with militants in the Red Sea port city of Jiddah, killing five and capturing a sixth.

Al Qaeda, the Muslim extremist network blamed for the Sept. 11 attacks on the United States, is led by Saudi-born bin Laden.

Bin Laden has targeted the rulers of his homeland, saying they are insufficiently Islamic and too close to the United States.

Al-Faisal said both the United States and Saudi Arabia needed to work to "reverse the trend towards alienation and suspicion" so they could cooperate in their fight against terrorism and al Qaeda.

Al-Faisal said Americans should stop focusing on the fact that most of the 19 hijackers in the Sept. 11 attack were Saudis. He denied that the kingdom was responsible for the ideology that fueled al Qaeda and bin Laden.

Recalling America's support of the Taliban during Afghanistan's war against the former Soviet Union, al-Faisal said America was as much to blame as Saudi Arabia for bin Laden's rise.

"If Saudi Arabia is guilty for what he has become, the United States must surely share the blame," al-Faisal said.

Earlier Monday, Saudi Finance Minister Ibrahim al-Assaf said Saudi Arabia had established an authority to serve as a clearinghouse for all donations to foreign organizations. The apparent goal of the authority would be to prevent Saudi money from supporting terrorist organizations.

"No organization will be allowed to collect donations in Saudi Arabia except through this organization," al-Assaf said. He did not elaborate.

The General Security building, the administrative headquarters of the Saudi domestic security service, was severely damaged in the bombing that came just days after the United States warned of possible terror attacks in the kingdom.

Last month, a purported al Qaeda message appeared on the Internet threatening Saudi police, members of the intelligence forces and other security agents. The message said targeting Saudi security agents "in their homes or workplace is a very easy matter."

The explosions came only days after Saudi authorities announced they had seized three booby-trapped SUVs that were loaded with a total of more than four tons of explosives and had apparently been abandoned by militants involved in a shootout with security forces.

The April 12 shootout in Riyadh left one suspected militant and one policeman dead. The next day, militants opened fire at a checkpoint in Riyadh, killing four police officers. Eight people have been arrested in connection with the shootouts.

The United States two weeks ago ordered the departure of nonessential U.S. government employees and family members from Saudi Arabia. It also urged private citizens to leave the kingdom, and the U.S. Embassy in Riyadh issued an advisory, warning of "credible indications of terrorist threats aimed at American and Western interests in Saudi Arabia."