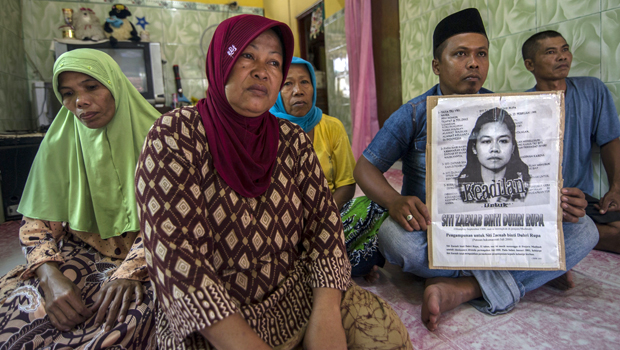 DUBAI, United Arab Emirates -- Saudi Arabia carried out at least 157 executions in 2015, with beheadings reaching their highest level in the kingdom in two decades, according to several advocacy groups that monitor the death penalty worldwide.

Coinciding with the rise in executions is the number of people executed for non-lethal offenses that judges have wide discretion to rule on, particularly for drug-related crimes.

But while most crimes, such as premeditated murder, may carry fixed punishments under Saudi Arabia's interpretation of the Islamic law, or shariah, drug-related offenses are considered "ta'zir," meaning neither the crime nor the punishment is defined in Islam.

Discretionary judgments for "ta'zir" crimes have led to arbitrary rulings with contentious outcomes.

In a lengthy report issued in August, Amnesty International noted the case of Lafi al-Shammari, a Saudi national with no previous criminal record who was executed in mid-2015 for drug trafficking. The person arrested with him and charged with the same offenses received a 10-year prison sentence, despite having prior arrests related to drug trafficking.

Human Rights Watch found that of the first 100 prisoners executed in 2015, 56 had been based on judicial discretion and not for crimes for which Islamic law mandates a specific death penalty punishment.

Shariah scholars hold vastly different views on the application of the death penalty, particularly for cases of "ta'zir."

She says in Saudi Arabia, defendants are not provided defense lawyers and in numerous cases of South Asians arrested for drug trafficking, they are not provided translators in court hearings. She said there are also questions "over the degree of influence the executive has on trial outcomes" when it comes to cases where Shiite activists are sentenced to death.

Emory Law professor and shariah scholar Abdullahi An-Naim said because there is an "inherent infallibility in court systems," no judicial system can claim to enforce an immutable, infallible form of shariah.

"There is a gap between what Islam is and what Islam is as understood by human beings," he said. "Shariah was never intended to be coercively applied by the state."

Similar to how the U.S. Constitution is seen as a living document with interpretations that have expanded over the years, more so is the Quran, which serves as a cornerstone of shariah, he said. The other half to shariah is the judgments carried out by the Prophet Muhammad. Virtually anything else becomes an interpretation of shariah and not shariah itself, An-Naim said.

Of Islam's four major schools of thought, the underpinning of Saudi Arabia's legal system is based on the most conservative Hanbali branch and an ideology widely known as Wahhabism.

A 2005 royal decree issued in Saudi Arabia to combat narcotics further codified the right of judges to issue execution sentences "as a discretionary penalty" against any person found guilty of smuggling, receiving, or manufacturing drugs.

Catherine Higham, a caseworker for Reprieve, which works against the death penalty worldwide, says her organization documented 157 executions in the kingdom. Saudi Arabia does not release annual tallies, though it does announce individual executions in state media throughout the year.

Saudi law allows for execution in cases of murder, drug offenses and rape. Though seldom carried out, the death penalty also applies to adultery, apostasy and witchcraft.

In defense of how Saudi Arabia applies shariah, the kingdom's representative to the U.N. Human Rights Council, Bandar al-Aiban, said in an address in Geneva in March that capital punishment applies "only (to) those who commit heinous crimes that threaten security."

Because Saudi Arabia carries out most executions through beheading and sometimes in public, it has been compared to the Islamic State of Iraq and Syria, or ISIS, which also carries out public beheadings and claims to be implementing shariah.

Saudi Arabia strongly rejects this. In December, Foreign Minister Adel al-Jubeir told reporters in Paris "it's easy to say Wahhabism equals Daesh equals terrorism, which is not true." Daesh is the Arabic acronym for ISIS.

Unlike the extrajudicial beheadings ISIS carries out against hostages and others, the kingdom says its judiciary process requires at least 13 judges at three levels of court to rule in favor of a death sentence before it is carried out. Saudi officials also argue executions are aimed at combating crime.

Even with the kingdom's record level of executions in 2015, Amnesty International says China, where information about the death penalty is a "state secret," is believed to execute more individuals that the rest of the world's figures combined.

Reprieve says that in Iran, more than 1,000 people were executed in 2015. Another organization called Iran Human Rights, which is based in Oslo, Norway, and closely follows executions, said at least 648 people had been executed in the first six months of 2015 in the Islamic Republic, with more than two-thirds for drug offenses.

Reprieve says Pakistan has executed at least 315 people in 2015, after the country lifted a moratorium on executions early last year following a December 2014 Taliban attack on a school that killed 150 people, most of them children. Only a fraction of those executed since then have been people convicted of a terrorist attack.