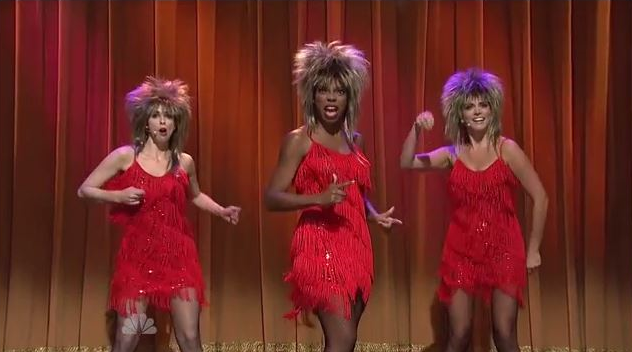 "Saturday Night Live" is under fire by members of a Los Angeles-based comedy troupe who claim one of their ideas was used in a piece that aired last weekend, reports CBS News correspondent Elaine Quijano.

The controversy began when a member of the improv comedy group The Groundlings noticed some striking similarities between a sketch that aired on "Saturday Night Live" and one they started performing six weeks earlier.

In between versus of "Proud Mary," Turner's signature song, the cast members took turns cracking jokes about their lives.

"Actually, when I say I left a good job, I really did leave a good job. Not only did I leave it, I burned that bridge to the ground," Strong said.

But when Ian Gary, a former member of The Groundlings saw the skit, he accused "Saturday Night Live" of stealing. He said The Groundlings have been performing a similar skit since September.

"This is Tina Turner impersonators talking about a riverboat casino in Nebraska, singing the 'Proud Mary' where they take breaks in between singing their songs to lament the choices in their lives so it is beat-for-beat the sketch," Gary said.

The Groundlings sketch features two Tina Turner impersonators working in a cabaret lounge -- and like the "Saturday Night Live" sketch, they dress and sound like the singer.

On his Facebook page, Gary posted a picture of the two sketches saying, "Stealing other peoples art and passing it off as your own like you're the biggest bully in the room is not okay."

"Saturday Night Live" declined our request to comment, but a source close to the show said, "It's a common idea since Tina Turner is such an iconic figure. The similarities represent parallel thinking in the comedy world."

Scott Collins, a TV critic for the LA Times, said that even though both sketches might look the same, the differences are in what's being said.

Gary wasn't the only member of The Goundlings to call out "Saturday Night Live." The actresses who both wrote and performed the piece also said the original idea was theirs -- a claim a source close to the show said is purely coincidental.