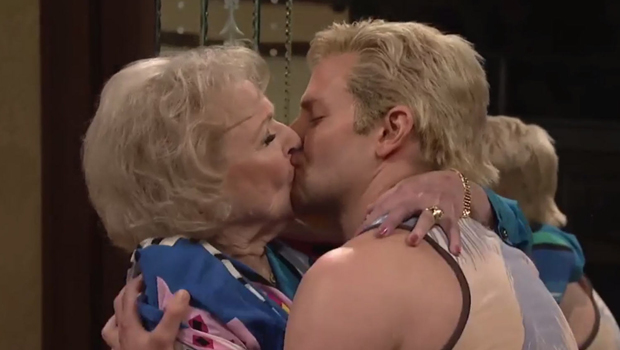 "Saturday Night Live" celebrated its 40 years on the air with a star-studded special airing live from New York on Sunday night.

There were celebrity appearances, performances, throwbacks, tributes and, yes, plenty of laughs. Here, in no particular order, are our 10 favorite moments from the long-running sketch show's three-and-a-half-hour milestone celebration.

Talk about starting off on a high note -- the celebrity pals paid tribute, in song, to highlights from "SNL" history including the Ambiguously Gay Duo, "More cowbell!," Church Lady and, of course, "D--- in a Box." Molly Shannon even dropped by for a Mary Katherine Gallagher armpit-smelling cameo, and Rachel Dratch was there as Debbie Downer, too.

No stranger to the "SNL" stage, Martin welcomed the audience and viewers by noting, "Tonight is like an enormous high school reunion -- a high school that is almost all white." He wasn't up there alone for very long -- fellow former hosts Alec Baldwin, Tom Hanks, Melissa McCarthy, Paul McCartney, Miley Cyrus, Chris Rock and Billy Crystal soon joined him to land quips of their own.

How great was it seeing that trio of funny ladies behind the Weekend Update anchor desk? After cracking some jokes about "SNL" and how times have changed since it was first on the air, they welcomed a series of celebrity guests to the table. First, Emma Stone paid tribute to Gilda Rader with her best Roseanne Roseannadanna, then McCarthy came out with an impression of Chris Farley's Matt Foley. Then, Edward Norton tried out his best Stefon and was quickly joined by Seth Meyers and Bill Hader as the real Stefon.

And Tina...we were proud to be one of those "little dummies" live-tweeting #SNL40 while watching it. Even if you called us out on it.

Will Ferrell reprised his role as Alex Trebek and welcomed back some of his regular guests, including Darrell Hammond as Sean Conney (who still can't read categories correctly) and Norm McDonald as Burt Reynolds. Kate McKinnon also appeared as Justin Bieber, Jim Carrey did Matthew McConaughey and there was even a Bill Cosby joke in there, a cameo that Trebek frantically noted had been shot "six months ago."

Some of the TV special's best moments didn't happen live -- like this throwback montage of stars auditioning for Lorne Michaels in hopes of getting on the show. Some made the cut (you'll see plenty of familiar impressions and characters in here), others didn't, but they're all pretty great.

Andy Samberg and Adam Sandler put together a new Digital Short for the 40th anniversary special, devoted to all the times cast members have broken character and started laughing during a sketch. The song featured clips of different stars "breaking" over the years -- including plenty of Jimmy Fallon, a notorious mid-sketch giggler during his "SNL" tenure. (Also, the video was introduced by Zach Galifianakis wearing Sia's wig.)

First he got in a zinger about Brian Williams, and then Seinfeld took questions from the "SNL" studio's celebrity-packed audience. Michael Douglas wanted to know why, despite being a "sexual icon," he's only hosted the show once. Sarah Palin asked how much Lorne Michaels would pay her to run for president in 2016, with Donald Trump as her running mate. Former "SNL" cast member Ellen Cleghorne wanted to know why there aren't more black women (not just on the show, but in general).

But the best part was when Seinfeld called on Larry David, who asked, "Was I really a writer on 'Saturday Night Live'?" Yes, yes you were.

8. Bradley Cooper and Betty White make out in "The Californians"

How do you stand out in a sketch packed with "SNL" veterans like Fred Armisen, Kristen Wiig and Bill Hader, and A-list guests like Taylor Swift and Kerry Washington? By taking a blonde-wigged Bradley Cooper and national treasure Betty White and having them lock lips live on national television, of course.

They made us wait until near the end of the show for it, but it happened -- Mike Myers and Dana Carvey returned as Wayne Campbell and Garth Algar for a new "Wayne's World" sketch that included, among other things, multiple jabs at Kanye West. Excellent.

Quite possibly the best impression of the whole night. One question: How can we borrow that wind machine?

Tell us: What were your favorite moments from the "Saturday Night Live" 40th anniversary special?