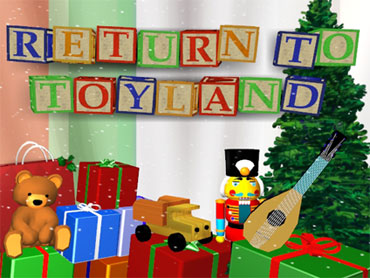 It was a magical morning as CBS News' "The Early Show" Saturday Edition broadcast live from inside FAO Schwarz on Dec. 5. The special holiday-themed broadcast gave a behind-the-scenes look at one of the most famous toy stores in the world.

Anchors Chris Wragge and Erica Hill investigated everything from "The Muppet Whatnot Workshop," to the candy shop "FAO Schweetz," to the giant piano and the "Madame Doll Newborn Nursery." They also highlighted the hottest toys of the season and provided tips on managing kids' holiday expectations.

Photos: Behind the Scenes
How to Make Your Own Muppet
Life-Size Lego Models
Hot Holiday Toys
Holiday Toys for Adults
How to Manage Kids' Holiday Expectations

In addition, 17-year-old actress, singer and songwriter Emily Osment joins the Second Cup Cafe. She also discussed her role as Lilly Truscott on the wildly popular series "Hannah Montana" and performed the first single off her recently released solo album "All the Right Wrongs" live inside the store.

Jessica Seinfeld appeared on the show to discuss her program for giving strollers and essential baby gear to those in need.

Baby Buggy: How to Help

Children's book author Jon Scieszka, who has written kids classics like "The True Story of the Three Little Pigs" and "The Stinky Cheese Man" and has been named the nation's ambassador to young people's literature by The Library of Congress, read to some of the many children gathered in the store. He also offered his picks for books to give this season.

Holiday Reads for Your Kids

"Early Show" contributor Katie Lee shared special holiday cookie recipes that are easy to make with the kids, and will spark family traditions.