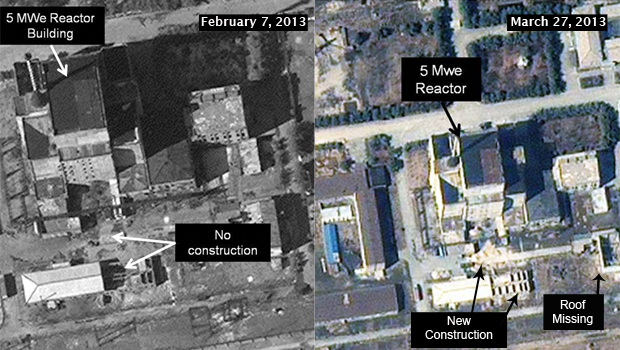 WASHINGTON North Korea has already begun construction at a closed plutonium reactor that it vows to restart, and it could be back in operation sooner than expected, a U.S. research institute said.

Pyongyang announced its plans Tuesday, the latest in an almost daily string of threats toward the U.S. and South Korea since it faced international censure over its latest nuclear and missile tests. North Korea warned early Thursday that its military has been cleared to wage an attack on the U.S. using "smaller, lighter and diversified nuclear" weapons.

The U.S.-Korea Institute at Johns Hopkins School of Advanced International Studies has analyzed recent commercial satellite imagery of the Yongbyon nuclear facility, where the reactor was shut down in 2007 under the terms of a disarmament agreement. A cooling tower for the reactor was destroyed in 2008.

The analysis published Wednesday on the institute's website, 38 North, says that rebuilding the tower would take six months, but a March 27 photo shows building work may have started for an alternative cooling system that could take just weeks.

"Pyongyang may be poised to prove wrong conventional wisdom that it will take months to restart its reactor, and in the bargain it is also showing us that they mean business by accelerating the process of producing more material for nuclear weapons," said Joel Wit, 38 North editor and a former U.S. State Department official.

North Korea also said it would restart a uranium enrichment plant. Both facilities could produce fuel for nuclear weapons.

State Department spokeswoman Victoria Nuland told reporters Tuesday that restarting the plutonium reactor would be "extremely alarming" but added: "There's a long way to go between a stated intention and actually being able to pull it off."

CBS News correspondent Holly Williams notes that, while there's no way of being certain whether North Korea's 30-year-old leader Kim Jong Un is genuinely willing to risk war with the United States, Secretary of Defense Chuck Hagel has made it clear the U.S. is taking the North's provocations seriously.

"Some of the actions they've taken over the last few weeks present a real and clear danger and threat to the interests, certainly of our allies, starting with South Korea and Japan, and also the threats that the North Koreans have leveled directly at the United States regarding our base in Guam, threatened Hawaii, threatened the West Coast of the United States," said Hagel.

The North has already conducted three underground nuclear tests. Plans to restart the reactor and increase production of atomic material underscore worries about its progress in developing a nuclear-tipped missile that could target the United States. It is still believed to be years away from achieving that.

The new construction at the reactor began in the six weeks between February 7 and March 27, when another aerial image showed no building going on, 38 North says.

Restarting the plutonium reactor would also depend on the availability of fresh fuel rods. According to 38 North, North Korea is believed to have a supply of rods, but many may need adapting for use in the reactor.

The North's plutonium reactor began operations in 1986 but was shut down as part of international nuclear disarmament talks in 2007 that have since stalled. Once it is up and running, the reactor is capable of producing 6 kilograms (13 pounds) of plutonium a year - enough for one or two bombs, the analysis says.