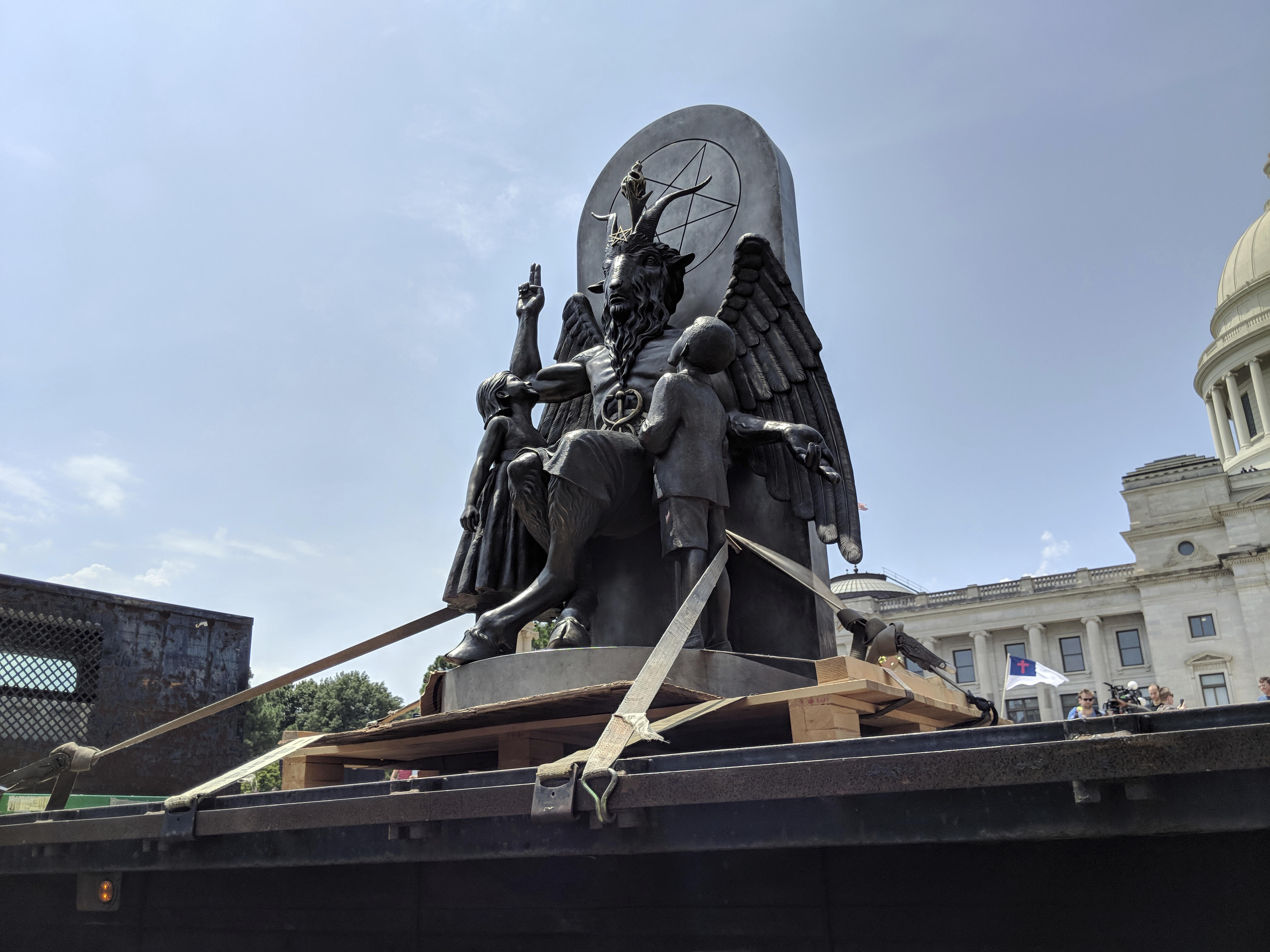 LITTLE ROCK, Ark. -- The Satanic Temple temporarily placed a bronze statue of a goat-headed, winged creature called Baphomet at the Arkansas State Capitol during a rally to call for the removal of a Ten Commandments monument already mounted on Capitol grounds. About 150 Satanists, atheists and Christians attended the First Amendment rally Thursday. The Satanic Temple says the Ten Commandments monument violates constitutional freedom of religion rights and that the installation of their 7 ½-foot-tall statue showing the 14th century idol seated and accompanied by smiling children would demonstrate religious tolerance.

"If you're going to have one religious monument up then it should be open to others, and if you don't agree with that then let's just not have any at all," said Satanic Arkansas cofounder Ivy Forrester, a rally organizer.

The monument arrived on a flatbed truck and was unveiled at the bottom of the capitol steps, CBS affiliate KTHV reports. Meanwhile, the Ten Commandments stood behind a screened fence surrounded by caution tape.

The statue of Baphomet can't be installed under a 2017 state law that requires legislative sponsorship for consideration of any monument. The Satanist group removed the statue later Thursday.

The Satanic Temple ended its campaign to install Baphomet there, after Oklahoma's Supreme Court ruled the Ten Commandments monument was unconstitutional and it was taken down.

Rapert said in an online statement that he respects the protesters' First Amendment rights, but also called them "extremists" and said "it will be a very cold day in hell before an offensive statue will be forced upon us to be permanently erected on the grounds of the Arkansas State Capitol."

There was a significant police presence at the peaceful rally. A small group of counter-protesters holding signs with Bible verses stood quietly nearby, occasionally singing Christian songs.

One speaker - a Christian minister - was interrupted by a yelling counter-protester, but police escorted the man who was holding a large wooden stick away from the stage.

The Satanic Temple wants to join a religious discrimination lawsuit against Arkansas brought by the American Civil Liberties Union. A judge has to yet rule on whether the Satanists can join the case.