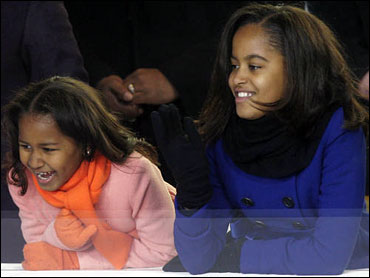 Call it Sasha and Malia Mania.

The Obama girls are getting a lot of attention these days, creating a global sensation with their smiles and styles, observes CBS News correspondent Bianca Solorzano.. American tweens, in particular, seem fascinated with Sasha, 7, and Malia, 10.

From inauguration eve, dancing to their idols the Jonas Brothers and Miley Cyrus, to the next day, when they officially became the first children, photographers caught their every move.

"They're still into wanting to perform," first lady Michelle Obama told CBS News. "I'm trying to get them focused on like law or something like that. But right now, they love the Jonas Brothers and Hannah Montana. So I think they see themselves as Disney potential!"

But now, Solorzano notes, marketing experts say they have the potential to be real pop culture trendsetters.

"Malia and Sasha's style will definitely influence tween girls," says tween expert Denise Restauri, CEO and founder of AllyKatzz.com. "They're already starting to talk about it. They're talking about coats they wore to the inauguration. They're talking about what they wore to the concert. Girls will start wearing what they are wearing, because they are the new celebrities."

Celebrities who were decked out by fashion designer J. Crew in Inauguration Day coats that have already become famous.

Asked by Solorzano how much fashion power the Obama girls have, J. Crew Creative Director Jenna Lyons said, "I think they have a lot more power then they probably realize."

This week, the company's Web site was so inundated with visitors that it crashed.

The phone, says Lyons, has been ringing off the hook. "People have been clamoring to get these actual items," she adds.

The paparazzi will be clamoring, too.

While the White House will be very controlling, there will certainly be a big market for photos of the girls, and photographers will try to circumvent the Secret Service to get those shots.

"There will be photographers," says Tomm Taylor, West Coast editor of x17online.com, "who will find a way around Secret Service and find a way to capture that unique, candid shot that will be published on the Internet and in magazines and newspapers the world over."

And while President Obama has vowed he wants the girls to lead normal lives, a huge banner on the building across from the White House welcoming Sasha and Malia is a constant reminder that it won't be easy, Solorzano points out.

But can Mr. Obama and the first lady keep them from the hot glare of the spotlight? And what's it like being so young with that glare on you?

Early Show co-anchor Julie Chen spoke with Capricia Marshall, former social secretary in the Clinton White House, and actress Tatyana Ali, who was a child star in the sitcom "The Fresh Prince of Bel Air":