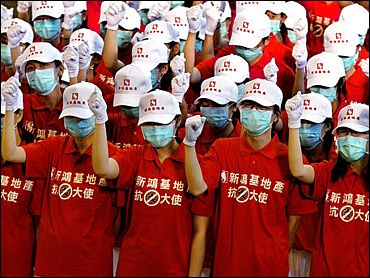 Farmers in a town in eastern China beat up officials and ransacked a government office where at least six local residents suspected of possibly having SARS had been quarantined after returning from Beijing, a witness and local officials said Monday.

Beijing, China's hardest-hit area, isolated 80 reservoirs to protect its drinking water supply, a newspaper reported. The number of people quarantined in the city in an attempt to control the spread of severe acute respiratory syndrome reached almost 16,000, according to the city government.

The spread of the disease, which has killed at least 206 people on China's mainland and sickened more than 4,200, has caused widespread anxiety and prompted some villages to try to block visitors from Beijing and other affected areas.

In coastal Zhejiang province, several thousand villagers had been protesting in front of the local government building in the town of Xiandie since May 3, when the travelers returned from Beijing, said a villager, who refused to give her name.

"They shouldn't have hospitalized patients in the government building, which has no medical facilities and professional staff," said the villager, who was reached by telephone.

Last week, protesters in a village east of Beijing ransacked a school, smashing windows and furniture after hearing the building was to be used as a SARS ward.

The Beijing Youth Daily reported that 80 reservoirs for the capital have been isolated and police patrols have been set up along the Yongding river, an important water source for the city.

The measures, which began May 3, will prevent vehicles and people from getting close to the river. Villagers have also set up barricades on roads leading to the river, the report said.

The city government referred all questions to the article.

In Beijing, 15,873 people suspected of being exposed to the SARS virus have been quarantined, the city government said on its Web site.

Entire buildings have been isolated in mass quarantines, including dormitories at Northern Jiaotong University, Central University of Finance and Economics, and the People's Hospital of Peking University, as well as apartments and construction sites, the Web site said.

Beijing has more than 1,800 cases of infection — nearly half the county's total — and 103 deaths. The city reported 98 new cases on Monday, the second day in a row that the number has dipped below 100.

Nevertheless, the city government said Sunday that its elementary and junior high schools will stay closed for two more weeks, extending a closure that was to end Wednesday and keeping 1.37 million students at home.

In Xiandie, the witness said five villagers broke into the building Sunday night, shattering windows and smashing furniture in some offices.

Three officials trying to stop the violence were injured, the witness said. She said the five protesters were later detained by police.

An officer in Yuhuan County Public Security Bureau said two people who led the attack would be detained for between five and seven days. Five other detainees would be released later, said the policeman, who gave only his surname, Chen. It was not clear when the two additional people were detained.

The witness said villagers continued their protest Monday morning, when they heard three more people had been placed under quarantine inside the building.

An official with the Xiandie Township government confirmed that several people returning from "SARS affected areas" have been isolated in the offices, but said none has developed symptoms.

"We are just implementing government orders. Nothing is dangerous, because no one is sick here," said the official, who gave only her surname, Dong. She refused to give more details.

"He listened to what we had to say today and assured he will and can get it done," Lil Wayne said.