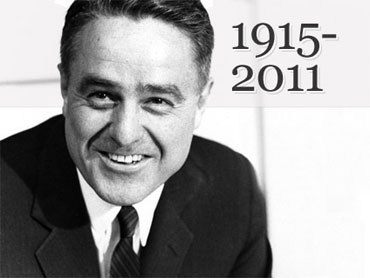 Shriver was perhaps the most accomplished man never elected to public office.

(Scroll down to watch an obituary on Shriver)

His career in public service and civic leadership spanned the second half of the 20th century. A call from President Kennedy ignited that career.

In 1961, Mr. Kennedy asked Shriver to launch a project called the Peace Corps. It only took him six months to get the program up and running.

President Obama hailed Shriver as "one of the brightest lights of the greatest generation."

"Over the course of his long and distinguished career, Sarge came to embody the idea of public service," Mr. Obama said in a written statement. "Of his many enduring contributions, he will perhaps best be remembered as the founding director of the Peace Corps, helping make it possible for generations of Americans to serve as ambassadors of goodwill abroad. His loss will be felt in all of the communities around the world that have been touched by Peace Corps volunteers over the past half century and all of the lives that have been made better by his efforts to address inequality and injustice here at home."

Shriver's family described him as loving "anyone who was a servant of peace, justice or joy."

"He was a man of giant love, energy, enthusiasm and commitment," the family said in a written statement. "He lived to make the world a more joyful, faithful and compassionate place. He centered everything on his faith and his family. He worked on stages both large and small but in the end, he will be best known for his love of others. No one ever came into his presence without feeling his passion and his enthusiasm for them."

Born in Maryland in 1915, Shriver worked his way through Yale University and then Yale Law School. He enlisted in the Navy during World War II and fought in the Battle of Guadalcanal.

He married Eunice Kennedy - President Kennedy's sister - in 1953. The Shrivers settled in Chicago and had five children, including broadcaster Maria Shriver.

"I think his legacy is more important today than it has ever been," Maria Shriver told Harry Smith on CBS' "The Early Show" in 2004. "The programs he created from the Peace Corps, Head Start, Job Corps, VISTA, foster grandparents, Legal Services for the Poor, they are still affecting millions of people today."

Shriver became known for his work in civil rights, and when Mr. Kennedy ran for president it was Shriver who helped build ties with leaders like Martin Luther King Jr.

"We don't have two wars," Shriver once said. "We only have one war. We have a war for the freedom of people and opportunity for all people regardless of race, color or creed."

After working for President Kennedy and President Johnson, Shriver had his chance to run for office in 1972, running for vice president on the George McGovern ticket, which lost to Richard Nixon.

He made his own presidential bid in 1976 and embraced the Kennedy family tradition as an antidote to Watergate.

"The cure will come from honest, truthful leadership that summons the best in us as we remember John Kennedy once did," Shriver said Sept. 20, 1975.

Shriver moved on and did more civic work. Among other accomplishments, he was instrumental in expanding the Special Olympics with his wife Eunice. Yet for all that he did for the public, it was his family that appreciated him most.

"Daddy made John F. Kennedy his best self," Maria Shriver told CBS' "Sunday Morning" in 2004. "I think he made Lyndon Johnson his best self, and in a way, that might be his legacy, that he believed that everyone could be their best, and he was willing to be the director take the back position in that and prop other people up so they could shine."