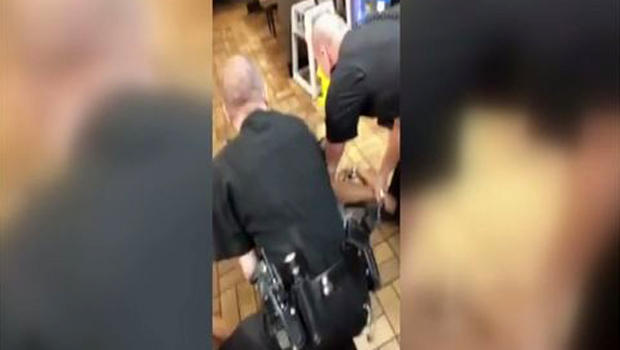 SARALAND, Ala. --  Police and Waffle House corporate executives are defending police intervention at an Alabama restaurant where a black woman's arrest, captured on video, raised questions about mistreatment. In a Monday news conference, police in Saraland, a suburb of Mobile, said that they responded when employees called them reporting trouble with a woman who appeared drunk and had been asked to leave for bringing in what employees believed to be alcohol.

When they arrived, witnesses told them that Chikesia Clemons had indicated she might have a gun and might shoot people. A video shows three police officers wrestling her to the floor and arresting her while she and a friend complain loudly.

The video shows two officers throwing Clemons to the floor. Her top somehow gets pulled down, exposing her chest.

"What are you doing?" Clemons asks.

Police say this statement was not made as a threat, but a warning that if she continued to resist, he could hurt her.

Clemons is charged with disorderly conduct and resisting arrest. She's free on $1,000 bail.

The NAACP has called the arrest troubling, and pickets stood outside the restaurant with signs Sunday. The incident gained traction on social media following a confrontation inside the Waffle House restaurant before dawn Sunday, with some people likening it to two black men who were arrested for trespassing at a Philadelphia Starbucks.

In a statement released by company spokesman Greg Rollings, Georgia-based Waffle House said it had information that "differs significantly" from claims by the woman.

"After reviewing our security video of the incident and eye witness accounts, police intervention was appropriate," the statement said. The company didn't provide any details about what occurred.

Police say the dispute began when Clemons and a friend disputed the company's policy of charging an extra 50 cents for using plastic utensils to eat inside the restaurant.

Saraland Police said after reviewing the video multiple times and speaking with witnesses, they are "not choosing to take any action at this time" against the officers involved.

Police also released a photo of Clemons holding a garbage can at the police station. They say she vomited into it.

The incident happened the same day as a quadruple homicide at another Waffle House in Nashville, Tennessee. The suspect in that case was arrested Monday after a massive manhunt.