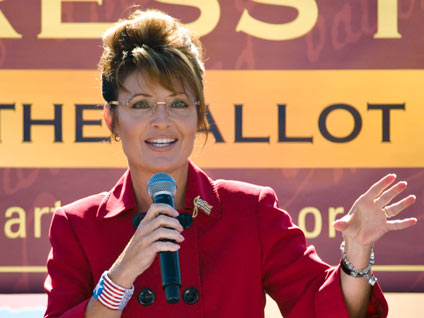 Former Alaska governor and Tea Party favorite Sarah Palin kicked off a Tea Party Express bus tour on Monday with a plea for Republicans to "man up" and support the movement.

It's no coincidence the nationwide bus tour, which hits 30 cities in the next 15 days before the midterm elections, started in Reno -- ground zero of this year's midterms. The Tea Party Express, a Sacramento-based group, has spent more than $1 million to defeat Senate Majority Leader Harry Reid, Nevada's Democratic senator, and elect Republican candidate Sharron Angle.

Angle could not appear at the bus tour kickoff since the Tea Party Express has made independent expenditures on her behalf, and political campaigns are by law prohibited from coordinating with independent groups.

Still, Palin's words echoed Angle's remarks in a debate last week, when she told Reid to "man up."

Palin went on to say on Monday that common sense is an "endangered species" in Washington, D.C. She also said that Tea Partiers are "turning this country's political landscape upside down," according to the Associated Press. "The left just doesn't know what to do with you," Palin added.

With unemployment over 14 percent in Nevada -- the highest in the nation -- Palin said of Reid, "Why in the world wouldn't you fire him?"

"What do we have to show for the liberal control they've had for the last 21 months?" Palin continued. "The ideas of the Tea Party movement are the American ideas that will put us back to work."

Angle and Reid have been locked in a dead heat for some time, though a couple recent polls show Angle narrowly ahead. The race has been marked by ferocious attacks from both sides, and while Angle last week told Reid to "man up," she earlier in the campaign season accused him of trying to "hit the girl," metaphorically speaking, by attacking her.

Angle made waves over the weekend when she told a group of Hispanic high school students they looked Asian.