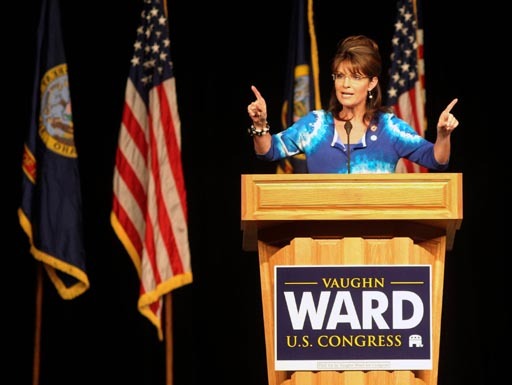 Sarah Palin announced her endorsement of three "Mama Grizzlies" on her Facebook page yesterday with a story about watching mother bears in Alaska who "worked twice as hard" as their peers.

"Last summer I stood on the grassy bank of an Alaskan waterway that was teeming with salmon to watch part of Alaska's brown bear population forage, fight, feed, and fend off enemies to survive," she wrote. "I joined Fish and Game biologists to observe 42 of these majestic wild animals all within eyesight, all at once. Even though I've lived all my life in the 'Last Frontier,' I still find days like that absolutely fascinating! And I swear the hardest workers on the water were those 'mama bears.'"

Continued Palin: "Obviously not waiting for another bear to do the work for them, the mama bears not only foraged for themselves to prepare for winter, but they worked twice as hard to slay salmon for their cubs, too, making sure the future of the population was ready for the season ahead. She would instinctively rear up on hind legs when her cubs were threatened - you don't mess with her cubs. And most importantly, just as the well known modern proverb expresses, she didn't just hand over a free fish for the day - she taught young ones how to fish for a lifetime. (There's no shortage of life lessons learned while scanning our great outdoors!)"

Palin invoked "mama grizzlies" back on May 14th at a speech at the the Susan B. Anthony List Celebration of Life breakfast; there she compared mothers upset about the direction of the country to "mama grizzlies" who "rear up when someone comes for their cubs."

Palin told the crowd that you "don't want to mess with moms who are rising up."

In her Facebook note, Palin discussed why she was backing each of the three women, all of whom are Republicans. McMorris Rodgers, a member of the House running a noncompetitive reelection race in Washington, is described as "a pro-family, pro-business fiscal conservative" with whom Palin notes she has something unique in common: "Cathy and I share a personal bond as proud moms who've both been blessed with sweet sons born with extra chromosomes."

"I have deep respect for Cathy's strong voice for families who are touched by those with special needs," Palin writes. "She formed the Congressional Down Syndrome Caucus which promotes research, education, and treatment to help improve the quality of life for those with Down syndrome and other challenges... Perhaps it's because we learn so much from these children and can see how they make the world a better place that I am confident that Cathy's respect for life, and her commitment to protecting America's Constitution, truly benefits all Americans."

Palin lauded Parker, an African-American from California seeking a House seat in a long-shot bid, for "rising up from being a single mom on welfare" to "build a non-profit network that seeks to reduce poverty and create a brighter future for America by promoting free market solutions and personal responsibility."

And she called Fallen, who is seeking the governorship of Oklahoma, a "fiscal conservative with policy experience, political backbone, and real world knowledge that will serve the entire state well as she proves her mettle as Oklahoma's next CEO." Palin noted that Fallen was the "first female lieutenant governor in Oklahoma history."

"I heartily endorse these liberty-loving 'Mama Grizzlies,'" Palin concludes. "They'll do more than just growl about our challenges because they know how to work hard and protect America's future by ushering a new era of prosperity and security. How? By proving their selfless service, common sense, and respect for the will of the people."