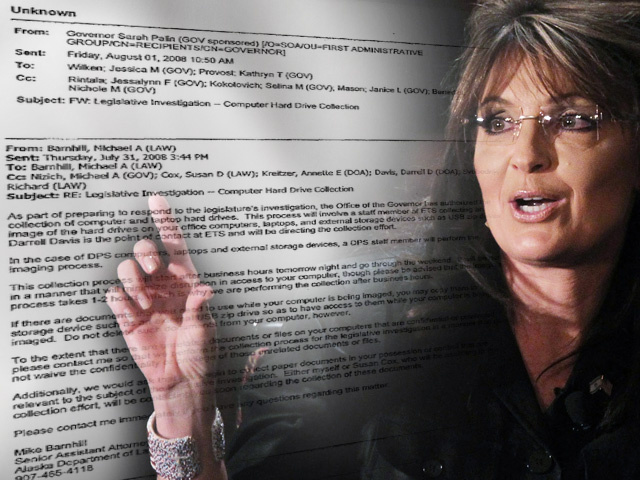 The state of Alaska on Friday released more than 24,000 pages of Sarah Palin's emails from her first 21 months as governor, though many were redacted.

Check out the complete collection of emails and documents here.

Many of the emails contained routine correspondence between the governor and her aides. So far, there haven't been any major revelations, and many of them were exposed in the recently published book, "Blind Allegiance to Sarah Palin: A Memoir of Our Tumultuous Years,'' by former Palin aide Frank Bailey.

Tim Crawford, the treasurer of her political action committee, Sarah PAC, said the emails "detail a Governor hard at work" and encouraged everyone to read them.

Palin emails released from time as governor
Palin Praises Obama '08 Speech -- Kind Of
Palin's emails: Work, disdain for the press -- and a haircut

CBS News has searched for some interesting tidbits among the thousands of exchanges. So far, the emails have given a picture that has already been drawn of the former governor and her political and personal life during her governorship and unexpected role as John McCain's GOP running mate in 2008.

Here are a few:

On August 15, 2008, Palin exchanged a series of emails with her aides about her travel plans for the Republican National Convention in Minnesota. Palin had not yet been picked as Sen. John McCain's running mate and wants to know what she would miss if she left the convention on September 5th. The convention ran from September 1-4.

"What am I missing in terms of major events at the convention if I leave then on the 5th? And when is the candidate actually nominated? On the 5th?" Palin asked.

In an email to staffers just weeks before she was tapped to join the Republican ticket, Palin had a few nice words for her soon-to-be-opponent, Barack Obama.

"He gave a great speech this morn in Michigan - mentioned Alaska," she told aides, urging them to release a response to Obama's campaign speech on energy policy.

She added that Obama "Stole out (sic) Energy Rebate $1000 check idea, stole our TC-Alaska gasline talking I points, etc. So we need to take advantage of this a write a statement saying he's right on."

A staffer responded to Gov. Palin, saying they had hoped and expected Obama to "say something positive" about some of the work the state legislature had accomplished on Alaska's oil production. Obama didn't, even though some "folks" in Alaska had been working with the Obama campaign.

Palin's response: "He did say 'yay' to our gasoline. Pretty cool. Wrong candidate."

As CBS News political correspondent Jan Crawford notes, in an email Palin sent on Sept 10, 2008 -- exactly one week after she electrified the crowd with her speech at the Republican National Convention -- she is asks the name of the "barber" who will be cutting her hair in Anchorage. It's interesting in light of the subsequent stories about Palin's wardrobe, her shopping sprees, etc. (which she blamed on John McCain's staff).

In an email to aides, Palin asks:

"Do u remember who the barber is who's going to trim my hair?"

And this was the response:

"Governor-- His name is Speedy. His barbershop is in the Capt. Cook Hotel."

On April 22, 2008, Palin fended off rumors that her newborn son, Trig, belonged to her daughter Bristol. "Even at Trig's doc appt them morning his doc said that's out there (hopefully NOT in their medical community-world, but it's out there). Bristol called again this afternoon asking if there's anything we can do to stop this..."

More than a year before Palin landed on the national stage, an aide suggested she meet with Pete Rouse, the chief of staff "for a guy named Barack Obama."

According to one of the emails from the February 2007 exchange, Alaska "Senator Ted Stevens loves Pete," who is now one of Obama's closest aides.

Palin says "I'm game to meet him." It was not immediately clear if Palin ever met with Rouse.

Palin wanted to get a tanning bed installed in the governor's house in Juneau. She was presented with options about where to put the tanning bed by Erika Fagerstrom, the manager of the house.

Fagerstrom said Palin could put the bed in the basement "against the wall where the table is currently located; plugging and unplugging the bed and dryer would be necessary as an extension cord cannot be used with the 220 outlet."

Or she said the bed could be put in the Cedar Closet, where they would have to install a new circuit breaker panel, which "the state would pay for" to accommodate the bed. "It would be beneficial to increase capacity for future use verses the basement where it isn't an issue. This option would allow for additional circuit loads on the 3rd floor to install washer/dryer during phase 2 of the plumbing project," Fagerstrom wrote.

It is not clear if Palin ever got her tanning bed.

One of the unsurprising themes from the emails is Palin's disdain for the press. In one email from September 2008, she says she "will continue to be dismayed at the media."

Here's the full quote: "I am so sorry that the office is swamped like this! Dinosaurs even?! I'll try to run through some of these in my head before responding. And the old, used tanning hed that my girls have used handful of times in Juneau? Yes, we paid for it ourselves. I, too, will continue to be dismayed at the media and am thankful you and Sharon are not part of the stange going's-on in the media world of today."

Sarah Palin also defended her role in "Troopergate," the controversy surrounding the firing of her brother-in-law, an Alaska state trooper who was in the midst of bitter divorce with Palin's sister. Palin was accused of putting pressure on public safety officials to have him fired.

In one of the emails she says the following: "I never asked, nor pressured Walt in any way to fire Trooper Wooten, as he admitted to reporters once the suggestion had been made. When first elected, my security detail asked that I forward on concerns to Walt about the one and only threat I've known of against me and my family (that was Wooten's). It was appropriate that I did so. I have no regrets in forwarding the concerns to him, as any citizen would do. No personal feelings ever influenced my recognition that DPS needed a lot more action and results in dealing with some horrendous activities in rural AK, and needed action to fill the dozens of vacant trooper positions that have sat empty for more than two years now. Thanks, and hope ypu (sic) have a great Sunday."

Gov. Palin had concerns about alcohol in the governor's residence, especially with teens roaming around the "House." She was assured by the executive residence manager that the mansion would be nearly alcohol-free.