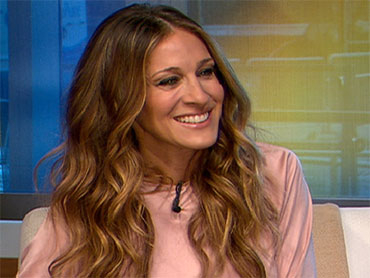 "Sex and the City" star Sarah Jessica Parker is all about New York -- but she's willing to roam -- just as long as she can come back to the Big Apple.

The Ohio native said her 33 years in New York have made the city her home.

"I have enormous curiosity about the world," she told "Early Show" co-anchor Harry Smith. "But reason I think I can have such curiosity is because I know I can come home to New York."

Hugh Grant on "The Early Show"

Parker isn't all that different from the character she plays in her new film,"Did You Hear About the Morgans?" which opens Friday nationwide. Parker plays Meryl Morgan, an intractable New Yorker who has to relocate with her husband in the Witness Protection Program after they witness a murder.

Parker co-stars with Hugh Grant, her second film with the famous Brit leading man. They acted together in the 1996 thriller "Extreme Measures."

"He was producing that movie; he was very busy," Parker said on "The Early Show." "I was doing another movie at the time. I was in and out. We didn't have a lot of time together on or off screen."

However, this time, the pair had an opportunity to connect both on- and off- screen.

Grant, who appeared on "The Early Show" Thursday said Parker is "very strange, very funny, and full of surprises."

"A girl that size, miniscule, I've never seen any human being eat that much food. You can put anything in front of her, and it's gone in seven seconds," Grant said.

Parker joked on the broadcast that she initially held Grant in "enormously high regard."

"He is obviously smart and witty and handsome, but he's also cutting and cruel and compelling and challenging, and so skilled at what he does," she said.

Along with making movies, Parker is a full-time mother of three. Parker and her husband, actor Matthew Broderick, recently had twins, Marion Loretta Elwell and Tabitha Hodge, through a surrogate. Parker and Broderick also have a son, James Wilkie.

Parker told Smith all of her children, including her 7-year-old son, still look -- and smell -- like babies.

"James smells good all the time. And of course the babies always smell good, and even a wet diaper smells good to me," she said. "I love it. It's warm."

Parker said her son James Wilkie is intrigued by his sisters.

"He's sweet about them," Parker said. "He has a special time of day he spends with them right after school. He always goes to say hello to them. He has a routine that he's established. But they're also interlopers, and he's figuring out his way in the world with them now. But they are deeply seduced by him."

As for the holidays, Parker says her family has the tradition of a naked Christmas tree.

She said, "My son will go to bed with a naked Christmas tree, and he'll wake up because Santa was there and decorated it."