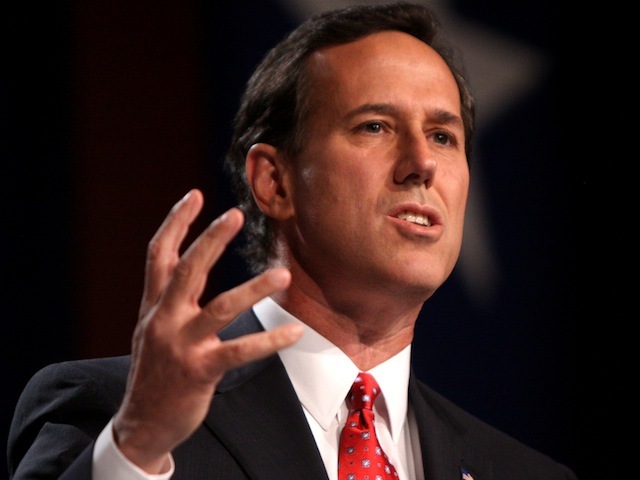 CONCORD, N.H. - In a spirited debate with gay rights supporters, GOP presidential candidate Rick Santorum on Thursday defended his opposition to liberalizing marriage laws by raising the specter of polygamy. "What about three men?" he asked.

Santorum encouraged the debate with several audience members who attended his address at a college convention sponsored by New England College. The audience of about 200 people included several supporters of Santorum's rival, libertarian Rep. Ron Paul of Texas. Some booed Santorum when he left the stage

One audience member, a college-aged man, asked Santorum how gay marriage affected him personally. A young woman asked him to justify his embrace of constitutional freedoms such as life, liberty and the pursuit of happiness while at the same time denying the right for gay couples to marry. They were the sort of in-your-face questions that New Hampshire town hall meetings are known for.

"Who's attempting to change the law?" Santorum replied. He sharply challenged the man to defend his support of gay marriage. Several audience members shouted answers in support of the questioner.

"Oh, no," Santorum said. "We're not going to shout." He admonished the crowd to raise their hands before speaking. Heeding his request, a gay marriage supporter suggested that Santorum is a hypocrite for restricting the right to marry while espousing constitutional rights to liberty, freedom and happiness.

"Are we saying that everybody should have the right to marry?" Santorum said, issuing a challenge to his audience.

Santorum: "So anyone can marry anyone else?"

Santorum: "So anybody can marry multiple people?"

Crowd members grumbled and shouted over each other. Santorum called for order again - "OK, maybe we can't do this," he said. "We're going to have a civil discussion or move on to another question."

The crowd quieted and one woman spoke for the pro-gay marriage faction by saying that married couples don't harm anybody.

Replied Santorum: "What about three men?" He was being provocative and might not have expected the answer he got.

"Go for it," she said. Once he realized that she was condoning polygamy among same-sex couples, Santorum sarcastically framed the pro-gay marriage argument: Anybody, he said, can marry as many people as they want. The gay rights supporters stood and applauded Santorum, apparently mocking him.

He moved on gracefully and without objection from the crowd after restating his view that God created men and women with the specific purpose to reproduce and marry. "I believe God made man that way," he said.

Much later in the event, after taking several question unrelated to gay marriage, Santorum field one more on the topic. He briefly answered it and, thanking the audience for inviting him, ended the 70-minute appearance.

As he walked from the lectern to sign a convention banner, several crowed members booed - marring what was otherwise a mostly civil debate between the candidate and the crowd.