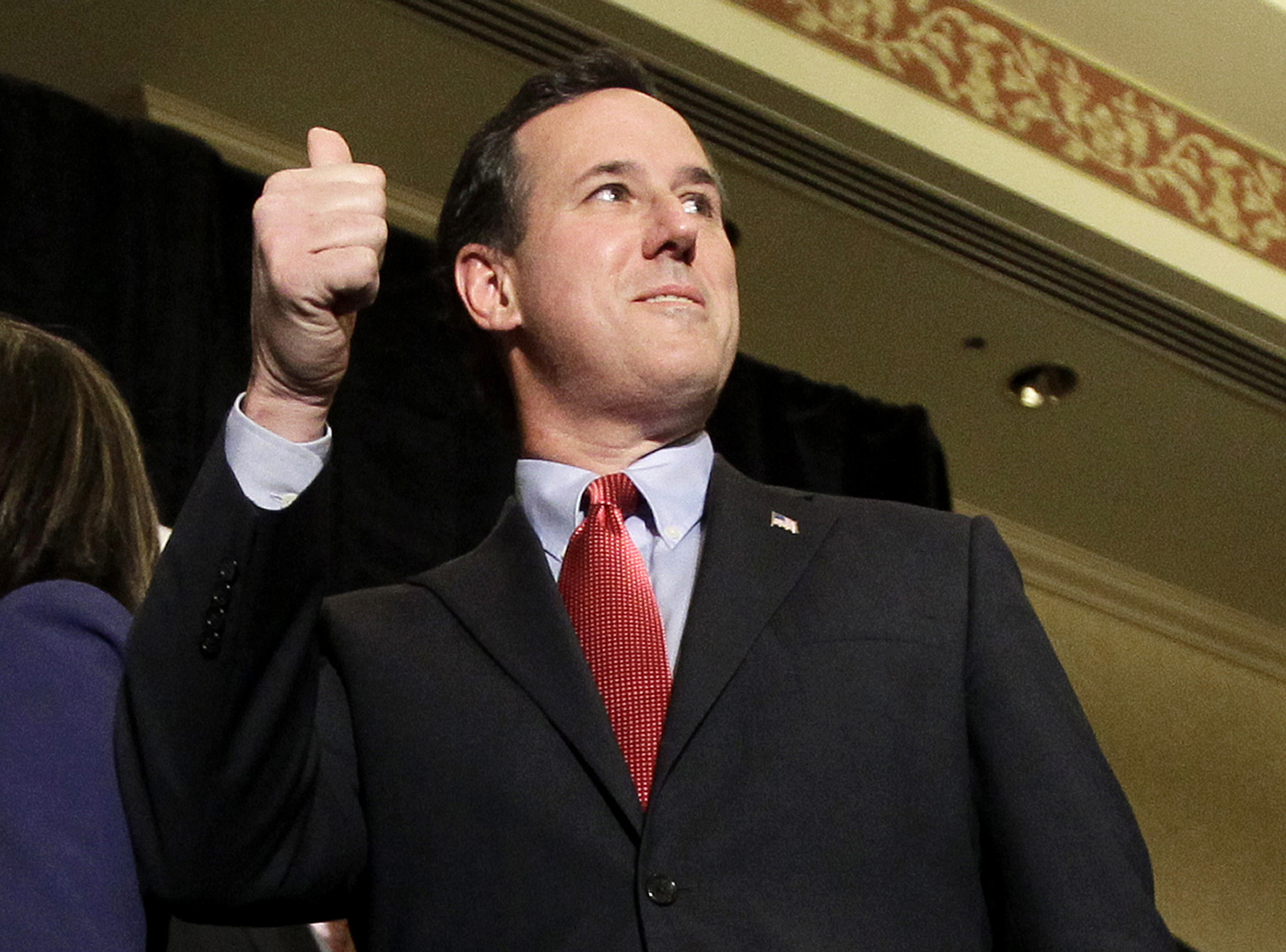 Following a triumphant three-state sweep in Tuesday night's nominating contests, Republican presidential candidate Rick Santorum is taking to the airwaves for a victory lap, blasting President Obama and his Republican rival Mitt Romney alike in an effort to translate his victories into momentum that begets more wins.

Speaking on Fox News's "Fox and Friends" Wednesday morning, Santorum attributed his Wednesday night sweep - albeit one that conferred no binding delegates -to his effectiveness in bringing his message on issues like the economy and Obama's health care plan to the American people.

"The issues I've been stressing are Obamacare, the Wall Street bailout and cap-and-trade - three issues where Barack Obama and, unfortunately, Mitt Romney, are on the same position," he said.

Santorum, a staunch pro-life social conservative, downplayed the possible impact of an ongoing debate over the White House's new policy on contraception in contributing to his victories.

"I don't think it was a big issue at all," he told Fox. "Our numbers were doing much better before this controversy came up. We've been talking about jobs and the importance of manufacturing and giving opportunity to people from the very bottom up ... that's what got us going across this country."

Still, the candidate - who devoted a substantial portion of his remarks in Missouri last night to the topic - pointed to the controversy as evidence that Mr. Obama is "hostile" to people of faith in America.

The former Pennsylvania senator said he did not believe that the Obama administration was truly interested in working with religious groups to "allay their concerns," as the White House has recently pledged to do, and accused him of launching a "direct assault on the freedom of religion."

"This is a president who just recently...was basically making the argument the argument that Catholics had - maybe even had to go so far as to hire women priests to comply with employment discrimination issues," Santorum said. "This is a very hostile president to people of faith."

The candidate did not direct his criticisms solely to Mr. Obama, however; Santorum, who has now won four out of eight nominating contests, also took aim at his rival for the GOP nomination, Mitt Romney. (Romney has won three out of eight contests so far, although he is significantly ahead of Santorum in the delegate count.)

The candidate continues to position himself as the "true conservative" alternative to Romney, and fought back against the Romney camp's claim that the former Massachusetts governor is the only candidate in the race who has stayed above the fray of Washington politics.

"It's funny, because I ran for the United States Senate the same year Mitt Romney ran for the United States Senate," Santorum said in an appearance on CNN. "We both ran I 1994. I won and he lost. It's not that Governor Romney didn't want to be Senator Romney; he tried to be Senator Romney but he ran as a very liberal Republican in Massachusetts who had just become a Republican. And he lost. And he lost badly in a year where Republicans had one of the biggest election sweeps in history."

Romney, Santorum said, "had a great career in the private sector."

"But we're not running for the CEO of the country," he added.

Santorum added that his campaign was doing "very, very well" financially in light of the wins, and had raised $250,000 overnight.